There seems to be a difference between how fractions are rendered in inline and block versions of LaTeX formulas.

I tested it out with a fraction to compare inline and block versions.

I would probably expect the fonts to look the same. I don’t know if this is a feature (or bug?) coming from the LaTeX interpreter.

Here is a comparison between edit and preview modes, try typing out a couple of fractions: 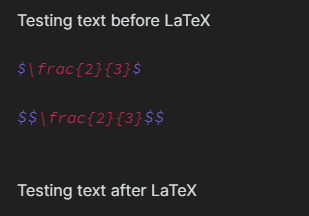 This is not a but. This is how it works.
Inline: formula inline with other text
Block: formula has its own line.