Labels above the cursor please 🙏

make sure that the page titles appear on top of the cursor/finger.
make sure it’s visible in all cases ( & in all themes.)
{but for now (as a quick fix), just mod a theme so that this doesn’t happen (just as a temp solution), or is that how themes work? idk I have no idea}
BUT! somehow makes sure the page titles are fully visible. no. matter. what. (especially when we hover the cursor on top of them, make them pop and make them easy to read.
thank you

Honestly, This should go under r/mildly_infuriating.
Because, the labels/names of the page appearing just beneath the cursor, where a portion of the title (top half of few letters, small words, a is here, an ism there) gets covered my the cursor, every, single. time.
it’s just, the perfect example of mildly infuriating.
it’s not a deal-breaker, but… it just makes it that much harder for things like, quick revisions & holistic views.
Thereby defeating the entire purpose of the knowledge graph. (making it easy to revise, create and link new ideas.)

I read this and I didn’t get what you are talking about.
Attach a screenshot maybe next time?
Also, we have feature request template. Please, use it. And don’t forget to search if what you are asking has already been requested.

i did search for keywords “label” & “knowledge graph”, “cursor hiding titles” didn’t see it there.
and 2 bad news(s)

( here’s the thing. Basically, when you hover your mouse over knowledge graph, it shows the title of the page, but… because it appears “beneath” the little dot that represents the page, (exactly where the cursor would be when you try to hover it over the dot), a portion of the title is hidden beneath the cursor. it isn’t much but it’s frustrating.)

It doesn’t happen for me, please see the increased spacing when the mouse is hovering it: 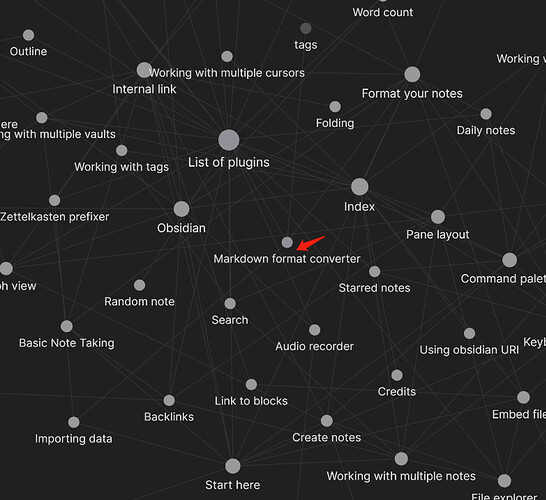 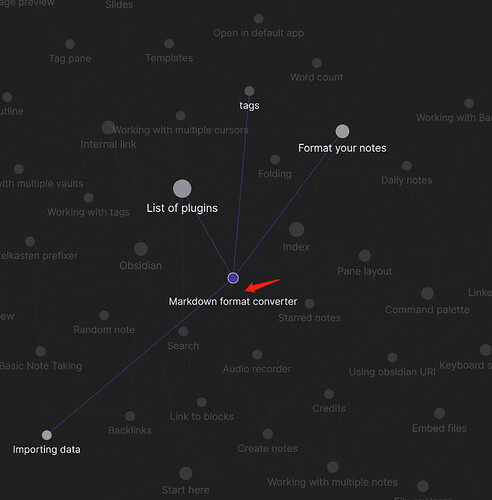 Like you said, the cursor is not captured when you take a screenshot, but it’s obvious because the node is highlighted.

We’ve intentionally made improvements in the past for this cursor blocking issue, so please follow the bug template and file a bug if you’re having issues with it.

no no no, it’s not a bug.
it is showing up the right way,
ooooh! i just realized, I have a bigger cursor!!!
oh! fk, i’m glad i remembered that, thank you for uploading that picture, cause my mouse would absolutely not fit in that space, it always blocks a tiny portion of the words all the time.

yes, I can reduce the size of my cursor. but… i’d have to do that just to interact with this one app. you know how much of a pain that would be… so,

is there a reason for the words appearing beneath the nodes?
is it a functional thing?
if not, can they (the page titles) be changed to appear on top of the nodes?

thank u for your time and effort

is there a reason for the words appearing beneath the nodes?

Yes, it’s the convention. Just like the caption appears under a figure, not above it.

but why tho ?
it doesn’t have to be that way, think about all the ppl who have big cursors, poor us

I don’t know how large your cursor is, but you can try to aim for the top of the node rather than the bottom. Don’t think we’ll change that any time soon, sorry.

k k, i did try doing that,
but I can’t click it, i have to do what I’m doing now, or train to use my track pad like a sniper.

Buy a Wacom and ditch the mouse/trackpad

After switching to Wacom, I’ve had a much better experience, everything from post-processing/photo work to note-taking and ‘regular’ use.