How would you build a personal "kialo" tree of points & counter-points on a topic?

A couple years ago, I discovered the website kialo.com and the way they organize points and counter-points in a debate or discussion was exactly what I’d been craving for expressing my own thought process on things. I’m the type that is always debating with myself, thinking about multiple sides of an issue, weighing the pros and cons…and each “yay” or “nay” argument opens up its own series of “yeah buts” lol

Kialo’s format is like a growing tree of all the points and counter-points anyone offers, which gives the reader a nice map of the different sides and perspectives around an issue.

I’d love to put some of my own internal debates with myself on “paper” in Obsidian.

Ohh this is interesting! I’m trying it now but am initially concerned that there isn’t a way to join multiple earlier claims together. (or did i miss that?)

I was thinking about how to do something like this in Obsidian too. It consists mainly of making sure you distinguish your notes between objective facts and your thoughts. Then ensuring that each thought is based on a fact, or an earlier thought.

Thanks for sharing this.

I have been unknowingly looking for this for sometime now.

I am definitely invested in figuring out a close replica of this in Obsidian.

thank you! Yeah figuring out how to do something similar in Obsidian would be so cool.

For some broader context: Kialo is an example of a class of software sometimes called computer-supported argument visualization (CSAV) software, which includes argument mapping software, and is part of the field called argument technology.

The original question above could be rephrased more generally as “How would you do argument visualization in Obsidian?” And the answers to that question could be seen as having two parts:

You don’t have to think about those two parts in that order; you may decide on a visual form first, and then look for a data model that fits, or vice versa. Either way, it would be a good idea first to make a list of requirements that you would like your system to meet and to look at a variety of existing options.

Regarding data models, one major decision you would need to make is whether you are storing the data that you want to visualize in a single note or in multiple notes.

At present, I use Dataview and Breadcrumbs to categorize and collect all notes that inform a particular topic. 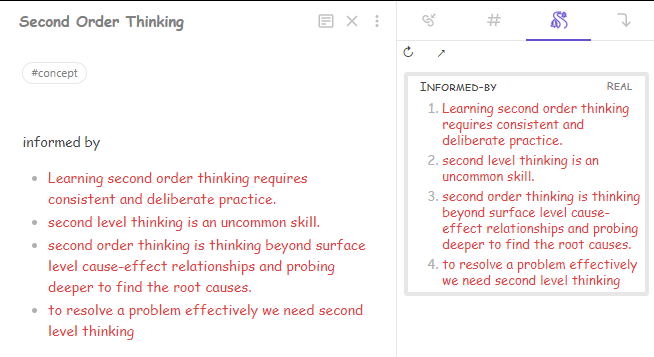 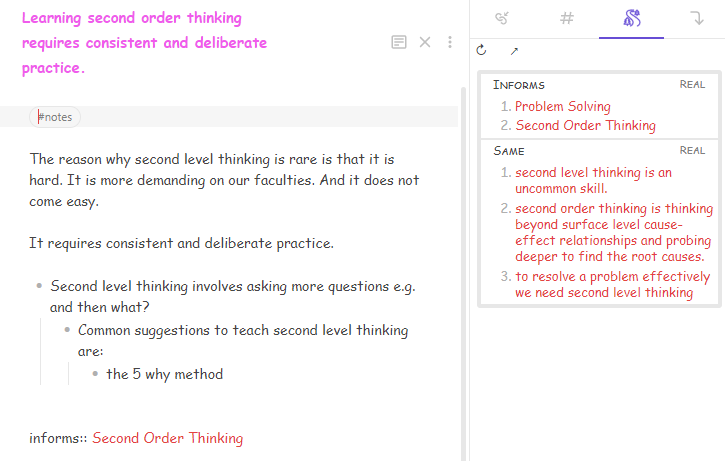 I think the same plugins and codes can be used for structuring arguments too.

Kialo seems to have a simple argument model consisting of a single thesis/position supported or opposed (iteratively) by pros and cons, but one could add other types of nodes/notes to the model. For example, another simple argument model called issue-based information system (IBIS) or issue mapping, adds a type of node called issue/question, and allows issues, positions, pros, and cons to be networked according to simple rules. Another potentially useful type of node is evidence, which can be used to separate the pros and cons from their supporting evidence. IBIS was discussed in a previous topic that may provide inspiration: Tips for making an issue-based information system.

Here is my template for each argument. I recommend using these plugins: Templater, Dataview, and Better Inline Fields:

Very interesting post!
Thank you for providing the template

@Ooker Could you tell a abit more about your setup?

I need some more questions to know where should I begin. Can you give some?