How do you separate Random thoughts & theories from knowledge notes?

Could be anything from an idea for a business or a book, to theories of time travel and aliens, or just some thoughts on human dynamics, society, alternative paths, or whatever. The important piece is they’re not connected to any book, class or other active input source, they’re just thoughts in my mind while going about my day.

I have an inbox folder that sits at the top of my vault. Random thoughts go in there. I go back there occasionally to go through them. 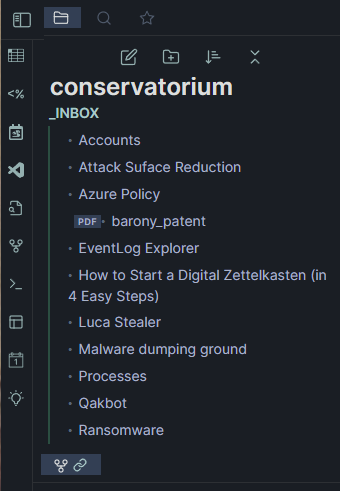 Anything I develop goes into the Zettel folder. The other folders are where I keep things that aren’t really related to “learning” or ideas. Personal is where I keep info on things related to me and people I know, professional has notes for the work that I’m doing and meetings, etc. 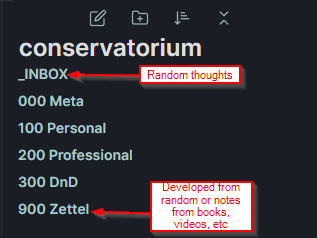 So if you record a theory on something it just sits in your inbox until you have the desire to expand it? I could benefit from your layout in other ways, but for these I’m interested in the connections to other thoughts and theories. I’ve recorded a few that were on similar topics, but I didn’t consider them related until I saw the commonality in the connections. I don’t want to lose that, but I also don’t want them to blend in with concepts from my learning.

Basically, yes. If I have an idea or I get a piece of information, I will make a quick note of that thing in _INBOX. It’s important to jot down enough to contextualize why the idea was worthy of being captured in the first place. I’ll go back later (sometimes much later) to take a look at notes in the inbox to see if there’s something that I need/want to keep or develop. If so, then I move the note. My zettel folder has no subfolders. Notes in there have to be linked to something, which is how I navigate them.

I found this to be helpful:
(980) How to Start a Digital Zettelkasten (in 4 Easy Steps) - YouTube

I watched that video, it’s very simplistic. This wasn’t a question about how to setup a system since I already have one, and it’s similar to what you have and what the video describes. If that’s how this question is coming across then I didn’t do a very good job asking it, because that’s definitely not what I had intended.

The one difference between how you describe your workflow and how these theory notes are handled in mine, is that I’m not interested in expanding them at this time (and maybe never), but I want them in the system connected to something, or at least available for some future note to connect to. They can’t live in the inbox for months or years.

Where it’s not as clear, and what the question was intending, is I also want some future assurance that the thought, idea, or theory was in fact mine. For this I need to not only mark the source as coming from my mind, but I also need to indicate how it came about, at least to the degree that I know. If I add a theory on time travel the day after watching Back to the Future, that’s a lot different than adding it when all my recent consumption has been about how to make a good cup of coffee.

From there I should be able to indicate that it was an original idea (as far as I reasonably know), an idea that I had while reading a related book or article, or an existing idea that I just happened to find interesting or useful.

The intention is if I run across this note in 5 years and decide that I would like to use it as part of something that will be shared, that I know, within a reasonable level of certainty, that the thought or the theory is in fact mine.

What I’m looking for, and the point of this question, is to add some structure and consistency to how I’m keeping track of this, so when I run across a specific note in the future it’s still clear how it came about.

Like you, I have these spurious thoughts, ideas, and theories; and also don’t want to loose track of them. My workflow involves my writing a daily journal (i.e. morningpages) and this is where I create my stuff. I have a header for each spurious thing. If, at this moment, I feel this thing is word considering later I use a Link in that header section called [[Essay Ideas]]. In that note “Essay Ideas”, i have list of notes (Dataview) that contain that link name. These are akin to your theories.
I believe one must routinely review past stuff; especially the inbox. If we capture more than we process, we negate the value of a PKM. Too much parked stuff is just too much parked stuff.
On a weekly basis, I review each of my previous daily notes and expound where I’m inclined to do so.
It’s also powerful to “tag” stuff by putting a link name in the block of text. Just this morning I was spewing stuff about improvisation, both musically and in writing. So I placed a link in that paragraph in my journal called [[improvising]]. At this point it is just a link to a note that does not exist. At some point I know the topic will resurface and I can then backtrack to all my previous notes about improvising and take the topic up and expound.
Not sure if you sorta new to Obsidian, but a much better overview is at this location. Somewhat dated, but it explains linking. Obsidian for Beginners