Invoking the hot keys initially does nothing.

If I use the toolbar to Bold or Italic words, the asterisks are added.

At this point I can then use the hot keys to un-bold/italic the words VISUALLY, however the asterisks still remain.

Does this happen with the default theme? Mind recording the behaviour?

The same thing is happening to me. I tried it with both the theme I was using (Everforest), the default theme, and Minimal theme. None work. Pressing cmd + b or cmd + i shows the bold or italic button on the floating keyboard, but does not actually do anything in the editor. Here’s a screenshot: 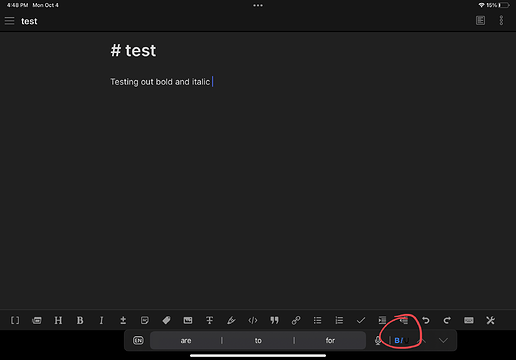 I created an account on this forum just to comment on this thread. I can confirm this is still an issue on the newest versions of iPadOS and Obsidian (unless you fixed it in the insider build). In addition, when you hold the Cmd key, the commands you see are only some default commands. It’s clear that the whole keyboard shortcuts system is not integrated with the new functionalities of iPadOS 15.

It would be great if we could see the full list of shortcuts upon long-pressing Cmd, like in every other app. I suspect that fixing this would also fix the fact that some keyboard shortcuts aren’t working, as well.

Also, as can be seen on the screenshot, the keyboard shortcut row takes up a lot of space to itself. In other apps, it typically gets minimized and hovers over the bottom part of the screen. It would be lovely if you could fix this, too, as we’re losing a lot of screen estate on the small iPad screens right now…

I have never faced this problem before, maybe there’s something with IOS update?

Setting the italics hotkey to CMD-Shift-I works. Maybe this is a conflict with system defaults?

I can confirm that @SHM said above—setting a different hotkey for bold and italics works.

Regardless of theme, the standard CMD+b/I doesn’t work—what @Mk20 notes in their screenshot is what I see too.

I’ve been seeing this as well, with all themes on iOS 15. It’s been a substantial impediment for using Obisidian on my iPad recently.

Hotkeys on iOS15 do not sync across from the Mac. I cannot set a new hotkey on the iPad. The hotkey command pallet does not work on the iPad. Has there been any progress with this or is it an Apple problem inherent in iOS 15.2?
Thanks

I’m not sure why this is happening to you. Depending on your sync solution, you can sync hotkeys, and hotkeys in general are certainly working on iOS. Consider opening a bug report to explain what’s happening in more detail.