I’m a student currently taking a comprehensive history course. I’d like to try and index my notes and thoughts into a centralized, chronological format for future reference (e.g. studying) in my Obsidian Zettelkasten. I am by no means an advanced user, especially when it comes to the Zettelkasten organization style, so I was hoping others might have ideas on how to implement this.

My current thinking is that I will have one pinned “timeline” note in which I link to all of the entries that I write for the class in a timeline format, and have brief summaries of important events and major ideas with links to separate notes for each one. An example entry might look like:

And then under [[Printing Press]] I would elaborate on its effects and link to other notes.

However, I’m not sure how this would fit in with the rest of my Zettelkasten (I was simply thinking that the index note would be separate from the rest of my system), and I wanted to ask around before I implement this system and potentially miss out on a better one. Has anyone else needed timeline-sort of index in a Zettelkasten or in a system like it?

This is actually quite interesting, but this kind of timeline-index should aggregate automatically, rather than created manually. There are different html-based timelines available (for example, https://timeline.knightlab.com/) that can be used to generate a timeline from atomistic Zettels. For example, the timeline may include only notes that have chronological tags, something like YY1440 for a specific year; YY1440-1450 for a range, etc.; these tags can be enriched with thematic context, like YY1440:print or YY1440:Europe. Timeline could be a plug-in similar to that of the graph network of notes.

You should move this to plugins or feature requests.

If you want to create the timeline manually have a look at the Linking Your Thinking (LYT) approach.

From what I understand the LYT system sits atop of your Zettelkasten and provides meta-notes (‘Maps of Content’ or MOC) - that would be your timeline. Maybe @nickmilo could give some input on this.

@peaks This sounds like a lot of fun—and very practical for your studies.

The beauty of using a higher-order note is that it doesn’t affect all your base Zettelkasten notes. It just gives you an augmented view—which you can use whenever it makes sense.

It seems that someone got there before me in plugin requests. Considering the response to those 2 previous posts, it doesn’t seem to be that popular of an idea.

There are different html-based timelines available (for example, https://timeline.knightlab.com/ ) that can be used to generate a timeline from atomistic Zettels.

but my (lack of) background in software development means that my judgement doesn’t mean much.

Thanks, I’ll look into that.
I’ve thought about meta-notes in the past, but having a pre-built system of implementation makes it so much easier to implement.

This approach is exactly the type of thing I was looking for! Thank you for putting in all the work that you have in developing this approach - beginning in obsidian is definitely the hardest part, and even just skimming the surface of the resources that you’ve compiled here makes it clear that they’ll be very useful.

I’ve recently bumped into this need myself. Since this appears to be one of the only threads on the topic and I’m necroing the hell out of it, It would be worth updating that this project is exactly what I needed. It’s also accessible in Obsidian community plugins and is aptly named Timeline.

I am reading history for pleasure only, but below is what I do with history in my obsidian. Maybe it can offer some help.

The center of the history notes are #reign and #period

#reign represents the period during which an individual manages a polity.
EDIT: I should add that although #reign carries the name of the ruler, it is in my mind not merely about the ruler. It is a representation of a period and context, which is a concept common in east asian reigns, where the emperors name his own “periods”.

I will always give #reign metadata as below.

For notes like [[roman empire]], which is a #polity in my files, they don’t have exact begin date or end, simply because I find it against nature. Empire doesn’t fall into the world on a particular year, it evolves.

So, everything except for #reign gets #period/1500s, or #period/0300s in my notes so I can explore hidden connection in graph mode. Mostly helpful in comparing what was happening around the same centennial.

Having a clear timeline of reigns then matter to me. So whenever I create new reign, I have a templater that inserts a timeline item in the reign note. This will automatically capture the metadata “begin” and “end” in my note. And the note record will be updated into my [[polities]] file, as shown in the red bars timeline. The [[polities]] file contain other indexes, but won’t explain further as those aren’t directly related to your concern. 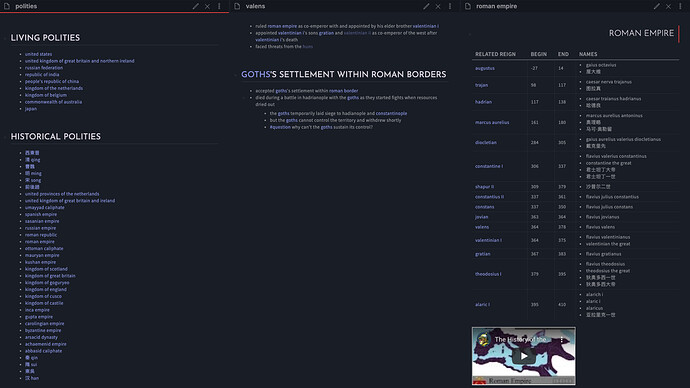 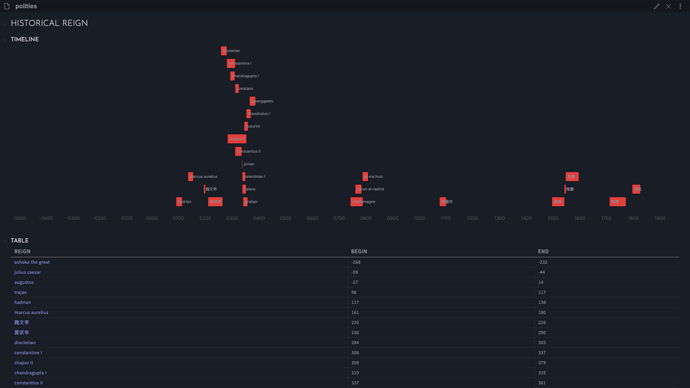