Hi,
I’ve been stumbling sync errors and wonder if anyone else seen it before/can give a direction.
Basically, everything works perfectly, but sometimes the sync finish with conflicts (pic below)

I’m trying to find the source of the error shown below: 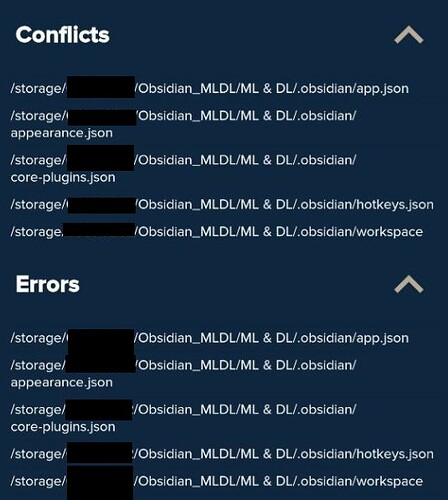 I’m syncing over MEGA not Google Drive but apart from that I’m having the exact same problem and I think I just found the solution.

Probably both files were modified for the Conflicts, so the App doesn’t know what to do (e.g. you modified your "hotkeys note on the PC and on the Phone and the Sync doesn’t know which one to overwrite the other).

To solve this you must either manually resolve this which means, manually deleting/copying. Or you can alter the Settings of your Folderpair sync.

If you go to your Folderpair → Sync Options → “If both local and remote file are modified” you have 5 Options. The Default will probably be skip file. You can turn this to use local, use remote or “overwrite oldest” all of which will resolve the conflict, but you must know which one it ought to be.

I’ll stay with “skip file” and when one error pops up, I look up the note in question, then turn the setting to what I want to happen, sync it to resolve the error, and turn the setting back to “skip”. Maybe I’ll notice a pattern and just say overwrite oldest. I’m syncing the MEGA folder to my PC so I guess both FolderSync and MEGA wanting to sync stuff might cause the occaisonal error.