Guys, just imported from Bear Notes and while Obsidian does allow tags, would really like to see it go a step further, similar to what Apple Notes has done with Smart Folders, where you can create ‘Virtual Folders’ that are created from filters, using tags.

Think of it like this, while #tagging is easy while typing, and it’s the approach Bear Notes use, the issue with this is you lose the structure.

Think of a folder like a project, and a tag like a task. A note inside a folder is limited to that folder, and can only be found in that folder.

A note with a tag can be accessed across multiple spaces. But if you create a smart/virtual folder that has a filter for particular tags - then you create the structure with more flexibility.

Some may say adding a note to a folder is time consuming, and cannot disagree. But as Seth Godin recently said… regarding ‘coiling ropes’.

Professionals put things away slowly, so that they’ll be ready quickly when needed. Investing time now for time later.

Would starred or saved searches solve this problem? 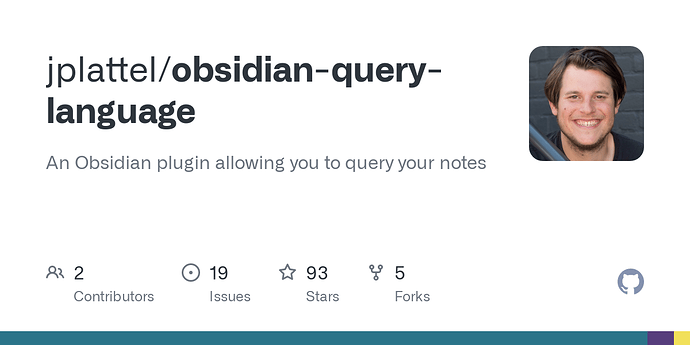 GitHub - jplattel/obsidian-query-language: An Obsidian plugin allowing you to...

Couldn’t you use OQL to create something like smart folders?

I have some files that I use in similar manner (a file with other vaults, because I don’t like the default vault selection modal) and I dragged them into the sidebars