Fold All should hide only the subheadings (Folding, Functionality)

Currently, Fold All (Fold all headings and lists) collapses the title heading.

So if I have a heading and three subheadings,

using Fold All I get:

This is not useful because it gives you zero information. What would be more useful is to hide only the subheadings, because it shows the high-level structure of the note.

With what I’m suggesting, Fold All would hide only the subheadings, and if you wanted to hide the heading (for whatever reason), you’d have to do it manually.

There is a feature request for specific level fold toggle:

Currently there is only a hotkey to fold/unfold ALL headings. It would be nice to have a hotkey for each level. So if I press the “Fold/unfold to level 3”, it will fold levels 3, 4, 5 and 6, but not 1 and 2. OneNote desktop version has something like this

I like the idea of being able to fold/unfold specific levels. Yes, I would.

This request is not a duplicated one of the linked request added by GreenChocho.

In fact the OP suggested a “refined” version called FOLD ALL (FOLD ALL CONTENTS WITHIN HEADINGS BUT NOT THE HEADINGS). 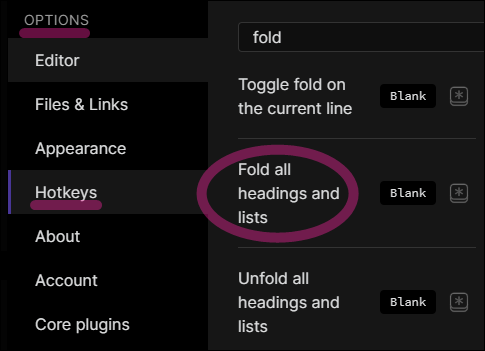 Yes, it is an “in-document Obsidian’s Outline”.

I apologize for the quick judgment. I read again this proposal.
Unfortunately, I don’t think it makes much sense to default to hide up to H2 (why not H3, why not H4?).

H1 is not the title heading, H1 is a heading.

This feature requests make sense if you genarally use only one H1 (as a title) and several H2 but it’s not what everybody does. I believe @GreenChocho’s proposal is applicable to a wider range of user cases.

I should have been clearer.

What I had in mind were two categories:

I’d made a few assumptions:

It could have been: