Files making copies of themselves

Type some text in a document, then pause typing for a second or so.

Nothing. The text should appear and Obsidian should do nothing, waiting for input from me.

Obsidian duplicates the file, appending the filename with the word “copy” or “copy-1,” etc. The copy is complete, the original does not contain recently entered text.

I think this is relatively recent behavior. I’ve tried Obsidian on-and-off for months. I haven’t used it in a few weeks, but when I tried it again yesterday, I observed this behavior. I don’t remember seeing this as a problem before.

Obsidian is useless to me because of this problem.

This is a company-owned machine – I don’t know what changes IT might have made in the background recently. I’m not having problems with any other apps, though.

Is your vault synchronized with icloud or some other synchronization provider?
Do you you some other backup tool, that monitors the vault and creates a backup in real-time?

Probably. I’m running Obsidian on a company-owned Mac. I don’t know 100% what they installed on it.

Could that be the problem? If so, why has it not been an issue until recently?

Are you using any third-party plugins, @MitchWagner?

Edit: or, are you using Hazel or similar on this folder?

I am not using third-party plug-ins. Nor am I using any custom CSS. Nor Hazel or anything like it.

Hmm. I’m having trouble fathoming what would cause this. It only happens when Obsidian is open with these files? Does it happen if e.g., you edit the same files with a different Markdown editor?

I’ll give that a try at some point over the weekend and see if the problem occurs with a different editor. That is a very good idea.

@WhiteNoise The vault is being synchronized over iCloud. But this is not been a problem during my previous obsidian trials earlier this year.

Another thing that occurs to me is that I cleared out this vault of nearly everything come out to get a fresh start. If the problem continues, I think I will try just deleting the vault and starting a new one.

Also, I am indexing the vault with DEVONthink. I wonder if that could have to do with the problem.

I’m working with Windows and synchronize my vault via pCloud. And I know the same problem. Sometimes (not very often) I also found files named Filename (copy).md. But that is a problem that I also saw in other programs. I believe it really has to do with synchronization.

Also, I am indexing the vault with DEVONthink. I wonder if that could have to do with the problem.

Hm. I’m wondering about this. What’s your DT sync conflict setting? I used to get tonnes of copies with a similar workflow, albeit not in Obsidian (I think I was using iA Writer at the time).

Find it here, in preferences: 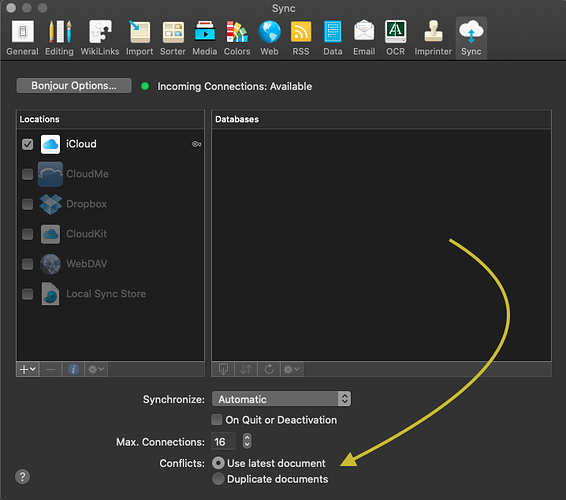 FWIW, if you are on “Duplicate documents,” switching to “Use latest document” resolved the (possibly different) problem for me and hasn’t caused any issues. (Good backup practices are always valuable though!)

Possible fix: I renamed the old vault and created a new vault with the same name.

Effectively, that deleted the old vault and replaced it.

Then I repopulated the new vault with the contents of the old one – only about four files and two folders so far, so that wasn’t much work.

And that seemed to eliminate the problem.

However, it’s only been a few minutes. I’ll keep an eye on things for the next few days to see how it works out – particularly when I return to work Monday and start giving Obsidian a good workout.

If this is the solution, I have no idea why it would work. DevonThink replication does not seem to be the problem but I can’t be 100% sure of that.

I’m having the same problem, thanks for the Devonthink tip; switched from Duplicate to Latest, hopefully that fixes it

How’s it going Mitch! Has the issue come up again?

If not I’ll move this to resolve

I encountered this exact issue with the same setup – Devonthink indexing of an Obsidian vault. Wanted to chime because I was able to resolve it by not putting the vault in iCloud. Dropbox seemed to work fine (same mechanism as my Devonthink sync).

This seems to be resolved. Here’s what I did:

Of course, it’s possible that neither one of those things are what solved the problem–the problem could have been resolved through some external change I’m not aware of.