Andy argues that evergreen notes should be atomic and to title them as such: https://notes.andymatuschak.org/Evergreen_note_titles_are_like_APIs

However, I find that this results in awkward titles for technical fields. Often, a note may be centered around a concept, and go line this:

I personally find these titles quite annoying. Possibly this is because of the lack of latex support in filenames so one has to write formulas out in English. I considered using UIDs, but this is inconvenient because Obsidian does not yet autocomplete on titles (only filenames) AFAIK.

Does anyone have any thoughts on if evergreen notes are a good fit for building a set of notes on scientific literature?

Interesting question - I’ll be curious to see what ideas you get in response. I would observe that Andy’s definition of atomic notes is “about one thing and as much as possible capture the entirety of that thing”. I’d suggest that how broad a “thing” is can be a function of your own system as wells as a function of the subject of your notes. I know many folks use “atomic notes” to mean “the absolute base level information on one point” but I don’t think that is really true. Andy’s notes certainly cover a claim with the points needed to argue it rather than just a single point.

Andy suggests declarative titles in order to sharpen claims. My suggestion would be that you use declarative titles for cards that are making a claim. What you seem to be describing though are notes that contain reference information - points that are known to be true rather than something you (or others) are inferring. My suggestion would be that reference notes titled “X” are fine but (in your example) “X is a key element in model M” might be a declarative title for a linked note on the relationship of X to model M.

EDIT: A few hours after posting this I stumbled on the following quote in @nickmilo IMF writings, it is a much clearer description of the point I was trying to make above:

Most evergreen notes should be statements with a strong opinions. That’s because it forces you to really think about what you’re trying to say.

That said, those Fact-based evergreen notes should then spawn ideas of your own that have strong opinions.

I think this is more (or less) just a collection of things related to X (I mean no offense). When I studied Queueing Theory, I also encountered the situation where the core principles are of mathematical nature, which means they are already at a high level of abstractions.

So for example, in my note, titled “MM1 queue”, I have something like this: 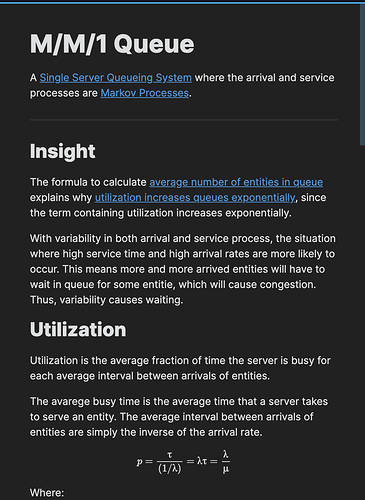 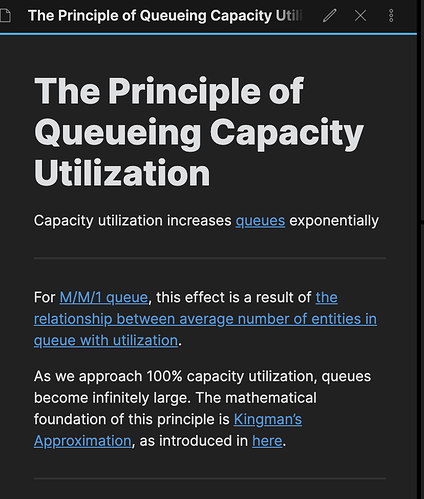 I consider the phenomenons (utilization increases queues exponentially) to be the atomic notes, and the “MM1 Queue” to be a highly abstract note that is useful in supporting the atomic notes. Hope it helps.

The way I approach it, is that those types of notes, in general, are not evergreen notes and thus do not need titles to be formatted that way.

Instead I make sure these notes follow a different set of rules, mainly that the information should fit into the default “page preview” overlay. The point is to be able to quickly refresh my memory as needed.

One caveat is the “relation to model m” MIGHT be an evergreen note. It depends on what the relation is and how meaningful it is to you.

The relation to model m might also be better suited to a link to model M.

Lastly, I don’t think it’s 100% necessary to use obsidian for this. I think regular notes is fine + anki.

What I do is treat each “block” as a separate atomic notes and use header referencing. For example, if you wanted to refer to the properties of X in another note: [[X#Properties]]

So you have a note called, for example X. X contains what is X and X’s properties, in different headers. When you need to mention X’s properties in another note, you use [[X#Properties]]?

Exactly. It makes the pieces more tightly coupled. Another neat thing about this is that obsidians link autocomplete will show you all the headers of X

Yes, having one page for X with different sections and linking to headings is what I do. I think the points made about factual notes vs. formulated/argumentation notes makes sense.

I’m working on a long-term technology development project and the “one thing” is going on 3 years now. Wouldn’t want to put that in one note!

I do have a top level MOC, which then breaks out into subtopics that slice the various stages by development in multiple ways – chronologically, algorithmicly, theory versus implementation. When near term development notes exceed a few screens worth of scrolling, or there’s an obvious change of immediate focus, I create a new note.

If I thought of it as a long-term lab notebook, I’d say my daily notes contain my day-to-day miscellaneous ramblings to myself, and if the ramblings produce the seed for an avenue of exploration, I break them out into a new note.

@memex This is an important topic to shed light on. Thanks for bringing it up.

There are many kinds of notes that SHOULD NOT become “evergreen” notes. I wish there was an easy way to summarize what these other notes are (maybe someone can think of something), but they seem to fall under at least one of the following categories:

These are kind of like “Known knowns”. These “Known knowns” are crucial in knowledge management. Without them, evergreen notes would have far less to cling to. These fact-like notes act as dependable pillars that we can then link to our new opinions and original thoughts (ie, evergreen-styled notes).

I do have a top level MOC, which then breaks out into subtopics that slice the various stages by development in multiple ways – chronologically, algorithmicly, theory versus implementation. When near term development notes exceed a few screens worth of scrolling, or there’s an obvious change of immediate focus, I create a new note.

@ja_rule These are good ways to slice ideas. I especially like the contextual lens of “theory versus implementation”.

This and your other notes are useful. Thanks for your contributions around here!

For “fact” notes, what type of organization is to be pursued? I find in my notes I have a high ratio of facts and references (single article or book), to a fairly low ratio of “opinion” (Evergreen/Permanent/idea/declarative) notes. This seems natural to me: one needs to review a lot of literature, events, etc to form solid ideas of their own; shoulders of giants and all that. But it does raise the question of organization.

In Andy M’s notes, he described dumping all of these random collections into a single daily note as an aggregator, and also describes reference notes as separate. Of course there is some art in determining what the threshold is between a single note to capture miscellany each day, versus individual notes per miscellany; I’m wondering what people’s rule of thumb is on that. Length of overall note (I see Andy’s are mostly within a couple paragraphs)? Perceived importance?

@icebear
Have you read Andy’s note: People who write extensively about note-writing rarely have a serious context of use

Maybe those in scientific fields need to write longer notes than software developers, or sociologists, or those who are writing about PKM or productivity!

Or maybe there’s a misconception that evergreen notes must be original claims or opinions, not facts. That’s not my understanding.
Sonke Ahrens (p24):

Write exactly one note for each idea and write as if you were writing for someone else: use full sentences and try to be as precise, clear, and brief as possible.

I have notes with those characteristics that are completely unoriginal and uncontroversial.
Some even have declarative titles: i.e. “nitrate tends to decline as you go downstream”. I have not segregated those from notes containing my crabby opinions, although maybe I should.

They are not literature notes because the idea has pulled out of a larger paper that addresses other things, and may include links to additional papers or examples I’ve found since then.

If you think you have a giant library of original thoughts and opinions, there are three possibilities:

Have you read Andy’s note: People who write extensively about note-writing rarely have a serious context of use

Yes, this is one of my favorite notes from him!

Your other points are all very well taken.

On the utility of note taking systems (from others), I sense many people first read about Zettelkasten, Evergreen, etc and think if they just apply it their current workflow will somehow become more insightful, productive, or at least convenient - I was especially guilty of the last of these.

But imposing something that worked well for a German sociologist onto a different workflow that is already functional (for me for nearly a decade), well, is problematic. Being generous to Zettlekasten and other methods, my habits don’t change so easily, and may resist the change in ways that lower my overall productivity for quite some time during transition.

Being less generous, it’s wholly possible those note taking systems are only well adapted to their originators personalities, or those specific workflows, or both.

Thanks for sharing your thoughts on factual versus original notes, I knew the same myself but it is useful to hear others’ experience. I think one additional shortcoming in the “how to take better notes” literature, which aligns with Andy’s note you linked, is that there are rarely good examples of Zettlekasten, Evergreen notes, etc on a topic besides note taking, productivity, personal fulfillment, etc. This creates blind spots in how to apply the method to radically different fields, if at all.

Without them, evergreen notes would have far less to cling to. These fact-like notes act as dependable pillars that we can then link to our new opinions and original thoughts

I think you said what they should be called right there! “Pillars”