Embed file as a code/pre block (i.e. contents, with no processing)

I can tranclude using ![[ ]] easily enough. But that actually renders the file, i.e. processes the markdown.

I want to include the raw content of the file, as if it were inside a pre/code block. Is there a way to do that?

(PS: how do I get a preview when posting a topic?)

I can tranclude using ![[ ]] easily enough. But that actually renders the file, i.e. processes the markdown.

I want to include the raw content of the file, as if it were inside a pre/code block. Is there a way to do that?

(PS: how do I get a preview when posting a topic?)

The raw transclusion I am not sure if that can be done without a plugin, I also don’t know if a plugin that does that exists.

But for the posting, does you post window have a set of chevrons on the lower right side? if so click that and it should open a side window with a preview. 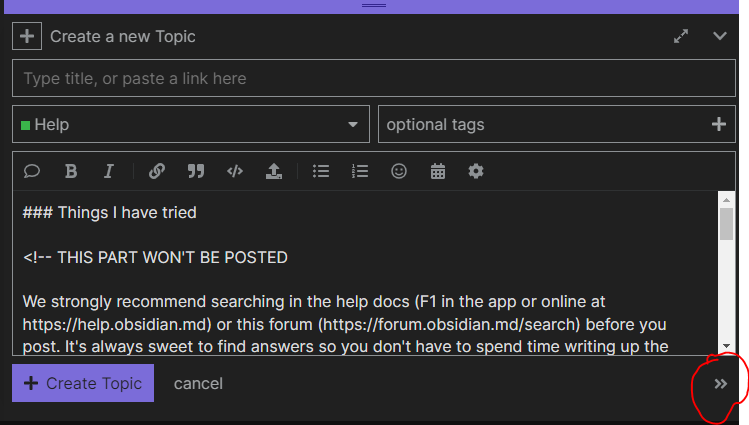 Example of side preview pane:

On mobile, the preview button looks for me like a computer screen rather than the arrows, but it is in the same lower right-hand corner location that JimK pointed out!

I don’t have a great answer to your question @ksdavidc but here are some things to check out and experiment with:

thanks, found the preview button, obscured by a forum welcome message.

I want to be able to do both, by default render as is, but via some means to have it just output the raw, and in such as way that that can be inside of another container, e.g. a blockquote.

For example, I might want a render, and then show the code that generated that rendering.

Thank you for the reply. I don’t think your suggestions are quite what I am looking for.

What I am asking is, if in obsidian is it possible, or has someone has found a way, to do something like (i.e. NOT this, but a modification of this, i.e. the transclusion [[ and ]] markers)

but have it output the unprocessed contents of the file.

Right now, if the contents of <filename.md> are:

If my modified “unprocessed transcluder” were, say “[! !]” I could the type this in Obsidian:

**this text**
outputs as follows:
this text

Effectively, since I am new to Obsidian, I wondered if there is already a way to do this. Of course there may be other ways to achieve the effect other than a “modified transcluder”. That is just one approach that I imagine, and maybe someone else has come up with a completely different, probably smarter, way to do it.

In fact, there could be other desirable features (like being able to put it into a blockquote, or other processing step) that I could imagine being useful.

Of course it might be something I would have to code myself, but I would rather not reinvent the wheel.

Hi ksdavidc, yes you are right that I do not know how to do what you are looking for. One more piece that might be related, however: the output of Obsidian’s built-in search gives the unprocessed contents of files, and you can embed those via query blocks. I do not know if you can get the full portion of the file that you want to display to show up as a search result, though. There are community plugins that expand the query functionality, which may or may not be helpful here.

Otherwise, you can search the “Feature Requests” category of this forum for words like “unrendered” or “not rendered” “transclusion” and make your own with your [! !] example if you do not see what you are looking for.
Good luck!

Thanks for the reply and suggestions. I’ll see if it something I end up needing often, and them maybe take the next step…

Hello,
Please have a look at this https://github.com/almariah/embed-code-file

Thanks. It might be useful for others, but in my case I am not trying to transclude code, but markdown file into a pre block.