+1 This would enable a far superior workflow for me.

+1 This would be really nice for writers

+1
Even simpler, being able to copy text from a transcluded block without having to open the original note would be pretty helpful already.

+1 I am really envious at Logseq users at the moment for this feature.

That being said.
Thank you for all your amazing and hard work on this amazing app!

This is the only remaining scrivener feature (scrivenings) that keeps me from doing longform in Obsidian. The non feature reason I hesitate using Obsidian for longform is the distraction of chasing new things while trying to focus on writing the longform:)

This article on keeping daily notes in one file total vs one file per day presents a powerful use case for editable transcluded notes. The author now uses daily notes as provided by default (one note per day) but created an additional note that transcludes all of his notes so he can view them in one place. Unfortunately, he can’t even run a find command on the transcluded notes without going into Reader mode.

If we could search and edit those sections, and even transclude-link to a new day (or note) and then just start writing in that note, without leaving the parent note context, but then be able to backlink directly to that daily note later on, that could become really powerful.

@NothingIsLost is giving us something that may be a big help to some of us desiring editable embeds/transclusions: Editable Hover Pop-ups. 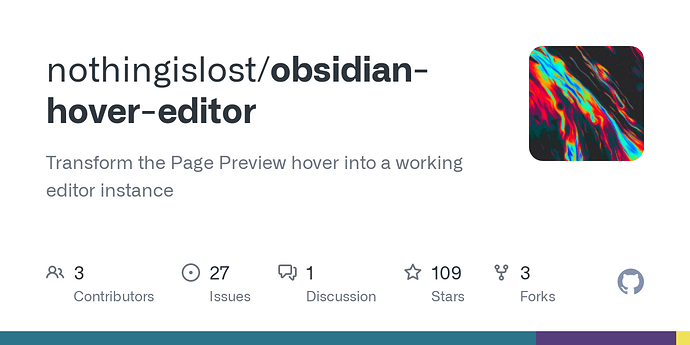 Disclaimer: as of writing, it is not yet in the Obsidian plugin browser, but can be installed through BRAT. Edit: Now available on Community Plugins.

It also gives hope that something similar might be possible for embeds as well.

I just gave this plugin a try, and found that it essentially achieves (to my liking) this thread’s feature request. My steps (important: I’m using the “live preview” setting… have not tried this with the edit/read-toggle config)…

…and, you never “left” the parent note.

This all works quite well and is sufficient for my needs. I considered authoring my content to include internal links adjacent to the transclusions, to make the editing workflow even easier, but don’t really feel that need at the moment (and it’s nice that the parent note is “cleaner” without that link).

Thanks for the plug!

Hover Editor was actually accepted into the Community Plugins browser a few days ago but I’ve been working on releasing 0.6.0 before I announced that too widely.

There’s a number of improvements and new features in 0.6.0 which you can get a quick overview of here: GitHub - nothingislost/obsidian-hover-editor: Transform the Page Preview hover into a working editor instance

I tried it out and it is really neat, I think I’ll keep it around. However, @coreyti’s workflow, while a good workaround, is not exactly the same as editing the transcluded notes in place. While you indeed don’t switch over to the other page in the top-level working note, you’re still making edits outside of that space and in the small hover editor. This is fine for small edits, but ideally, I’d like to be able to click or keyboard down (vim) into the actual transcluded block and have the block itself be editable, not just open an editable popup of the actual page that eventually updates the transclusion.

So I am of the opinion that the FR has not been completely fulfilled, though this is an excellent step towards it.

you’re still making edits outside of that space and in the small hover editor. This is fine for small edits

In the top right corner of the hover pop-up there is an icon to enlarge it to normal pane size so you can edit the note to your heart’s delight.

True, you can enlarge the hover editor which is definitely helpful. I would still ultimately prefer to not have to open any hovering window in the first place, regardless of its size, but just edit the actual transcluded block. I agree that this is a huge step towards the goal.

sorry for accidental delete above

The hover editor is an awesome solution for this request for now, and for many other cases outside of this feature request. Great work there!

But I strongly disagree that we should close the feature request over this.

The hover editor is a feature-rich pop-up version of opening up a document in a new pane, but it is not a replacement for allowing us to edit translations in place. For an example, imagine you are transcluding a single section or heading from a large document. The transclusion may be a 250 word paragraph, whereas the document itself may be 5,000 words+. The hover editor would show you the 5,000 words. This has a massive impact on the user experience!

Here’s an example: My use case is to have Daily Notes (daily notes) which are transcluded from a Weekly Note. Right now, this feature request would unlock so much potential for my workflow. It would allow me to focus on the “day”", but any changes get reflected in my broader plans when I need them… rather than needing to jump between all of these daily notes (in pop-up editors, or otherwise).

I’m still keen on this feature request, and I know many others coming from other tools that are keen on this as well.

I can also imagine 100 other use cases where this feature would add value. I think we’re getting very close to it as well, which is exciting.

@Jerry999 I agree with your argument, so in my 2 comments I have now removed references that mention closing the FR.

Just want to chime in and say this feature would be a huge value add. I really hope it makes it into development.

I also want to chime in say this would be very helpful. As a recent switcher from Roam to Obsidian (my employer will not allow Roam or Logseq), it is the feature I miss most. It’s also the feature that I was specifically looking for when I first found Roam. Here’s how I use it:

I recognize Obsidian has a different model, and I am working to learn it and work with that model. I am aware there may be community plugins that solve this, but my work will not allow me to install any community plugins for security reasons. I am also aware that I can use the note composer plugin, but needing to go back to the note and extract and transclude manually adds a lot of friction, as does the need to click through the the linked note to edit.

I greatly appreciate all the work the developers and community have put in to making Obsidian such a great tool. If this feature does not appear I will learn to adapt, but all the same I am keeping my fingers crossed.

Are there indeed third party plugins to do this? At least until the devs are able to do it (fingers crossed)

my employer will not allow Roam or Logseq

Just curious (or nosy). Why would your employer ban Roam, or especially, Logseq (open source and 100% offline), but allow Obsidian?

Are there indeed third party plugins to do this? At least until the devs are able to do it (fingers crossed)

Hover editor works well enough for me for quick edits.

I would love to see this functionality. Just adding my upvote!