Deciding workflow for my case

Please mind that, if I am linking a syllabus, then almost each word is potential topic. with some interlinking as well.

The graph till now looks like this. Its too early to say, but still. 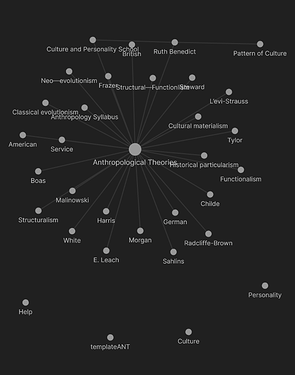 Any help would be really appreciated.

I think that you’re trying to impose structures way too early. Perhaps It would be better if you just compose atomic notes on topics that you are interested in (and only coincidentally taking the tests on), and then later move to a MOC when such a map emerges naturally.

For example, when you know enough about anthropological theories, then your MOC can be an overview of how different schools of thoughts emerge throughout time, the conflicts between them and how such conflicts give rise to new schools of thoughts, etc. Those are the sort of things I observe then I try to put many theories together in a chronological and comprehensive manner.

I said it somewhere already, but I feel like a MOC that just lists things are a bit wasteful, however others may offer alternative views about this.

From your graph, it’s not obvious to see you’re writing atomic notes, because the titles don’t reflect atomic ideas. Words like Neo-Evolution and Culture are too broad to be useful in systems that allow insights to emerge. And that’s another thing, Zettelkasten and its derivatives were invented as means to assist producing insights, not to help you ace your tests (thought that’d be a nice side-effect).

You are right about imposing structure too early, however I find myself in the same situation when I have to fill out a paper for PhD and for the first time I see that my notes (taken a few years ago) are not as atomic as I want now to be and I have to split them (ex: Malinowski’s Functionalism can be divided in: The structure of Society according to Malinowski, Empiricism as a solution to determine the nature of myth in Malinowski’s theory, Relation between Trobriand Islands geography and myth according to Malinowski, Relation between Trobriand Islands geography and structure of tribe according to Malinowski a.s.o). But since I’m pressed by that paper that I have to send I created a MOC where I put all my notes about myth, functionalism, Malinowski, Levi-Strauss etc. just to have them in front of my eyes and be able to write that essay.

For long term I have to revise all my 1000 notes and probably half of them I have to split them.

Sounds reasonable ! I think an MOC is suitable for an outline of a PhD paper. I just feel that keeping an MOC as a list for a long time seems wasteful. Starting it out as a list and then adding a layer of semantics over the ideas is what I also do with my notes.