Dataview task to include note title, H1 or annotation field

I have some projects (Let´s say: Project Alfa, Project Beta, Project Delta) and a separate note for each one. Within each note I have some checkboxes with tasks and also a tag (next, pending, nice-to-have) to priorize them.

I want to use dataview to show me in an “All Projects” note all the checkboxes with the “next” tag. I already got that working. But I also want to include the Project Name before or next to each task. The project name is included as the note filename, the H1 and as an Annotation (Project:: Alfa)

I don’t know if it would help to, instead of tags, put the checkboxes after some H2s within the note. If possible, I wold like to avoid adding a tag with the project-name.

I understand that you’re trying to manage your tasks based on two things:

The key is that you can filter (in the WHERE clause) tasks based on the task-level variable text. I don’t know that this is documented anywhere, but I found the approach in this Github discussion comment.

You can also use the section that a task appears in with meta(section).subpath (docs, though I found this from this discussion) or the file name with just file.link (docs, scroll to the “group by” example).

I created two notes in my vault –

The following query gives me the tasks grouped by section— 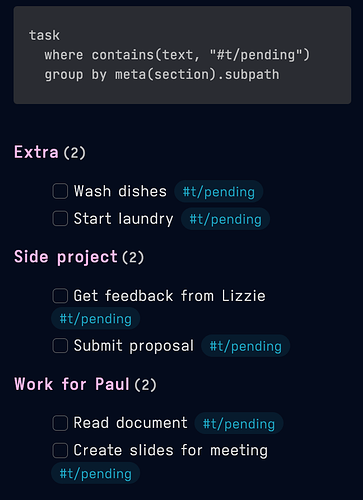 This groups by file— 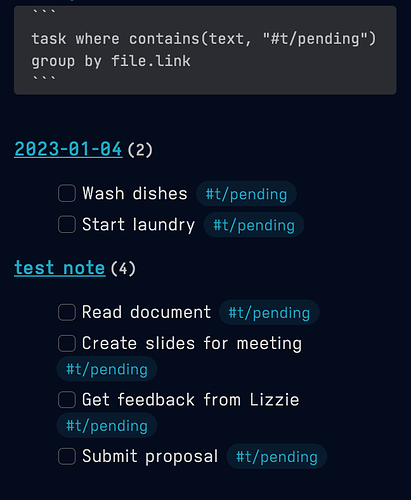 What I was missing was the Group By section in the dataview.
Just by adding it as “GROUP BY file.link” gave me the result I was expecting.
Now I get the Note Title and then the tasks.
This solved it!