Dataview-like GUI that renders to markdown or code block

I’m coming to Obsidian from Notion and I have no use for the graph view or even the backlinking features. However, I love the dataview plugin and I find it useful for most of needs. Luckily, I’m a programmer, but I can’t imagine someone without programming experience being able to use Obsidian in the same way I do.

If Obsidian had a GUI for creating dataview-like query tables, I think it would be a real Notion killer. It would replicate most of Notion’s features, while offering a million more features, greater speed, offline accessibility and encryption.

I realize it’s a pretty major feature, but I think it could be really effective.

Dataview plugin/dataviewJS. Fine for me, if a bit finnicky. But I couldn’t imagine recommending this plugin for most of my non-coding friends. Learning curve too high.

I have been a tinkerer since birth and coding (trying to become a “professional” dev but not YET), and this has allowed me to also get value out of dataview/js and also actually taught me about programming - designed a theme available in the store learning CSS and git that way. But for most, I totally agree, I just wouldn’t want to lose any functionality but i’m probably in the minority of people who get excited by seeing an unfamiliar syntax and some good documentation to go through.

I would imagine it’s either a plug-in in the works or deff something they’ve talked about. So I’d be interested to hear, from people like yourself more knowledgeable, on possible drawbacks, or if the dataview/js plugin could be added upon to create this.

I’ve thought about this for awhile as so much even in these forums is trying to share the little intricacies people have figured out to make these awesome applications of the plug-in.

But ya, thought i’d add perspective from an inbetweener of professional programmer/computer illiterate as I know I have had the same experience with interested peers.

Part of me also wants to say - an interested chimp could figure out the basic dataview but as seen on the forums some people are uninterested in the simplest forms of ‘search’.

I’ve been toying with the idea of making a dataview GUI. 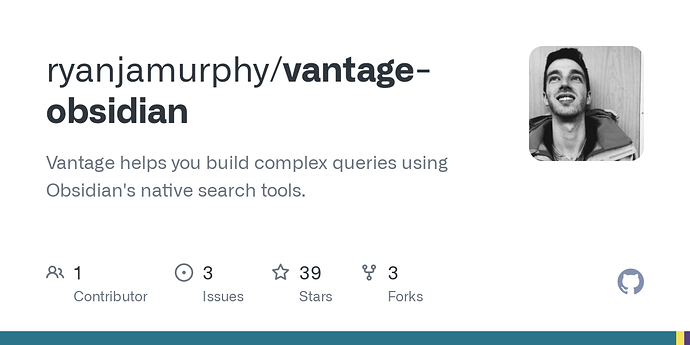 However, I’m sure someone else could do a better job than I, and I would love to not have to put in the work! Hahah.

I’m getting pretty good at my dataview-fu but there are some features I can’t imagine without a GUI.

Oh to see a group of files/links, drag to select them all, and then drag to a different group of tags, or to be able to “add a column” (add a field to all) like I would in Notion.

One of the biggest pain points for me w dataview is how hard it is to tweak after initial setup. My projects, notes, and their metadata are fluid, I’m not in any widget-cranking positions. So I’m always renaming things, recategorizing, adding and subtracting metadata. Maybe “auto updating dataview” is a separate feature request from “GUI”, but GUI would at least make the constant reconfiguring quicker.

I’m blown away by what can be done by this incredible community of mostly volunteers, but I wonder if those more advanced features will forever stay in the realm of the billion dollar teams at Notion, etc.