Obsidian has a very nice method of creating lists, checkboxes and ticked checkboxes. Select some text, hit Ctrl+Enter one to three times and go on with your life.

Hitting Ctrl+Enter a fourth time unchecks the previously checked checkbox back to an empty one. But it is currently not possible to easily go back to a bullet point. Instead, one indefinitely cycles between checked and unchecked status of the box again.

When hitting Ctrl+Enter a fifth time, we should go back to a normal bullet point. I guess cycling through it and wrapping back to the beginning?

Currently, none, as far as I know.

The Hotkeys++ plug in has a “Toggle To Do Lists” Hotkey that does what you want. It Shifts between BulletPoint/CheckedBox/UncheckedBox. 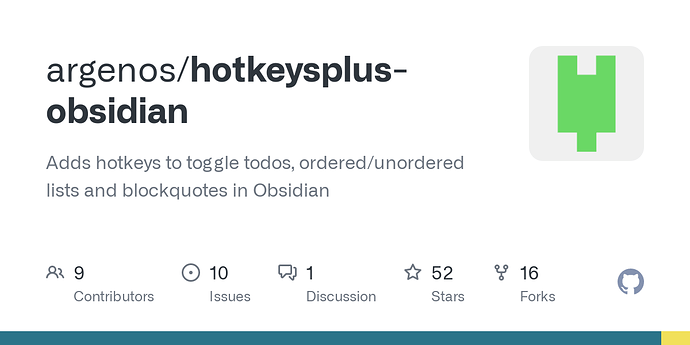 The title is correct, but I fucked up in the body of the question, and cannot edit it anymore.

The plugin does exactly 50% of what I would like it to do. It integrates the normal

into the cycle. So with the plugin it now goes

However, as I described in the title (and unfortunately not the text itself), every time I hit enter I’d like to be able to go

so that one can easily convert something back to normal text again. However, even with the plugin, once you’ve converted away from normal text, you cannot easily revert to it again.