It took me less than 15min from reading that sync is available to subscribing - awesome that this feature is available now! But it opens a question: Since there is no mobile client just yet, is it feasible to keep the local vault in a Dropbox folder to enable sync with 1Writer?

In theory this would mean that all three devices are always up to date, but is this wise to do so?

I was wondering the same and decided to test it by myself.

Now reporting back: sync acts as an additional layer by creating a remote vault to which your notes will be sync’ed. It will not relocate you local vault nor replace it.

So you could leave your vault in Dropbox or wherever you want to and still sync it to Obsidian’s solution.

According to documentation, you can actually sync up to 5 vaults to remote vaults, but I only use one.

Yes … I tested this as well - after making a backup of my vault. This all seems to work and I can make sure not to touch individual notes until the sync has propagated through all instances.

However, it still means running 2 sync engines on the same files …

What are the main selling points for Obsidian Sync (as of today) and above a service like iCloud or Dropbox?

I am using two Macbooks and synching with iCloud works like a charm.

For me, the killer feature of Obsidian Sync is that it makes version control available at a right click of the document. It works in a mixed environment and, I think, I read somewhere that it will be required for mobile.

For now, my hack with keeping the Vault on Dropbox on a single machine, to sync it with 1Writer has not caused any problems. However, I don’t need Dropbox for anything else and would rather not have it running just for this task.

My desktop is a Windows machine and iCloud is not really an option.

Finally, the early bird pricing is a good argument - and it supports the developers …

Thanks for the prompt reply @rfz I think for now I can do anything with a free account and iCloud sync but your last point is very valid. I think I have fallen in love with this piece of software and curious to see where the dev team can take it with some financial aid. Signed-up for both sync and catalyst insider.

One other point about Sync that I think hasn’t been mentioned is it will be the basis for future sharing and collaboration features.

If you just want automated backups with Dropbox, I made a plugin to do this which also works on mobile: 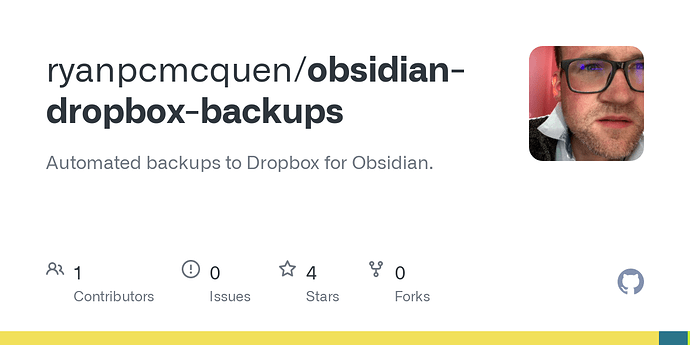 I’m trying to make sure I understand any risks involved with using Dropbox backups in conjunction with Obsidian Sync. I couldn’t find anything that specifically mentions using the two side-by-side, other than warnings that you do NOT want to store your vault in both Dropbox and use Obsidian Sync. Backing up seems very different from syncing, though, so I just wanted to be sure: can you do backups to Dropbox while still using Obsidian Sync, or could that cause race conditions, etc.?

I use Obsidian Sync for syncing, and have my vault in Dropbox on ONE computer. Never had any problems with this setup.

That’s the exact use case I built for. There are no conflicts or race conditions because Dropbox Backups (now called Aut-O Backups), just makes scheduled, automatic snapshots of the vault. It won’t interfere with any other syncing solution because it doesn’t do syncing.