I have task added to the daily notes that have the project number (a 5 character string) embedded at the beginning of the tasks string.
Then sub tasks are added to each project on different days.

I like to have the task sorted by the project number (first 5 characters) the the task description.

If all the task descriptions start with the project code, can you just sort by description? Is that not producing the correct answer?

Thank you for your prompt reply.

Perhaps and image would help… 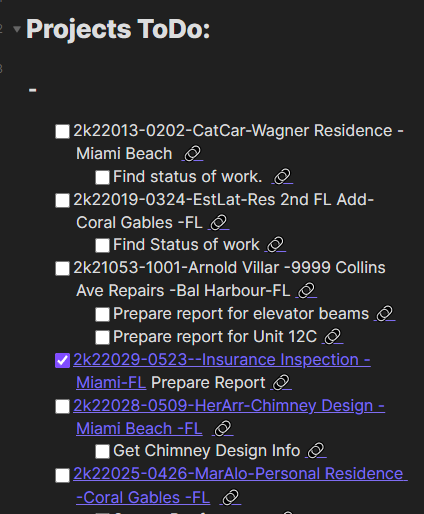 1- copy and paste the project information into a task line (from a master list)
2- add sub tasks as required/requested on that day.
3- have them listed as a Dataview (plugin) query of daily notes to create a master TO-Do List.

Thank you for your response.

It is not working because of the following: 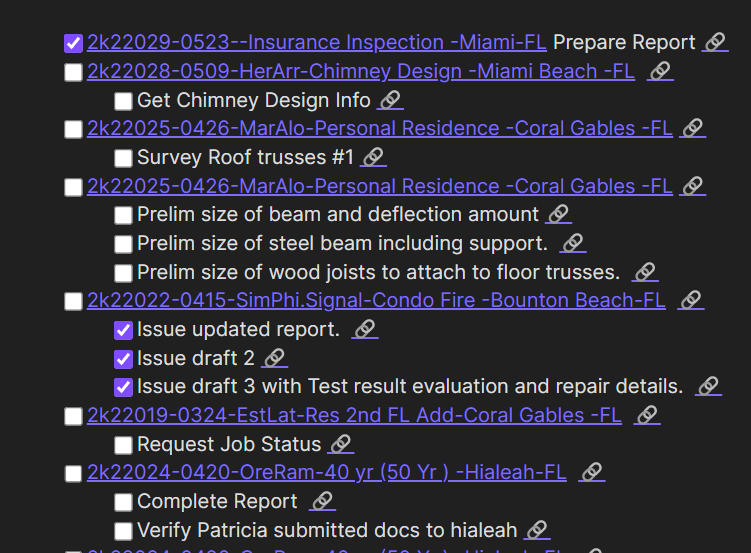 Thank you for the descriptions and the images. I understand much better now!

Of your two reasons for not working, the first one is easy to fix. You want to replace your line that is sorting with sort text asc. Dataview uses “text” instead of “description” for the contents of the task, and you said you want ascending instead of descending. Also put your sort before your group by if you want your groups to be sorted!

Consolidating is trickier. This will get you partway to what you want: replace your line that starts “group by” with:

Remember, you want this after your sort!
Substring is a dataview function that doesn’t show up in the documentation page for functions (there are a couple of these! Hopefully the documentation will get updated!). If you pass it a string such as the text of your task, and then tell it where in the string to begin and end it’ll give back just the portion between the beginning and ending. Starting at 0 includes the first character, ending at 7 means stopping after the 7th character.

So this gets you headings for your project codes. Any further consolidation is complicated. If I have an idea for it, I’ll come back and edit this post, but it likely won’t be until Monday in FL that I’d have time to think about it.

One more thank you for your prompt response to my inquiry.
I appreciate your help as I am an old engineer trying new things.
(My office nickname is “the old dinosaur”).

I followed the suggestions listed in your response and updated the Dataview script as follows: 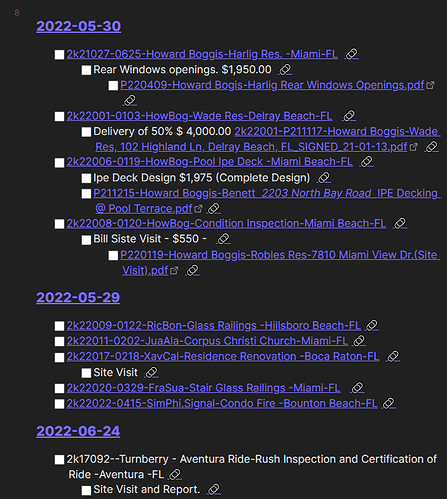 When I included the “group by substring(text, 0, 7)” at the end of the script I got the following error… 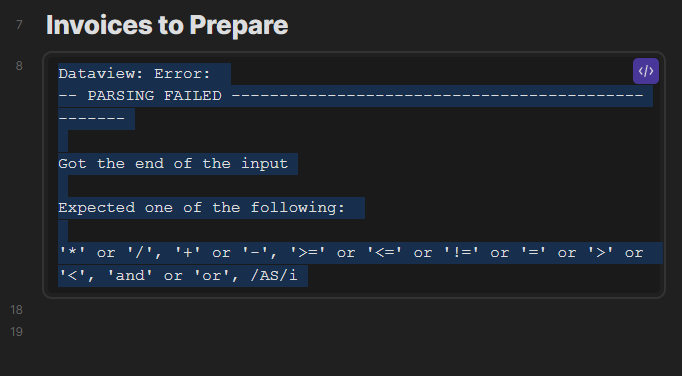 That’s odd! I did test this on my vault before posting and it worked. Can you check that your Dataview plugin is up to date by going to Settings → Community Plugins → “Check for Updates” button, then Update on Dataview (or Update All) then close and re-open Obsidian? I just now had an update to Dataview when doing this process. Hopefully we will be on the same version now!

And as part of this update substring is now documented!

EDIT: @Puy I confirmed that the query, including group by substring(text, 0, 7) works for me on the latest Dataview. If it doesn’t work for you then I am really confused!

one more time, thank you for your prompt response to my inquiry.

You were Right !!. (Needed to update Dataview - and some other plugins).

However, I ended up modifying the group statement to:

This way it only group the query results by the “task text” while ignoring the “sub-task text”.

Hurrah, glad it is working!

This way it only group the query results by the “task text” while ignoring the “sub-task text”.

Interesting! I think I understand the problem you solved with this (my apologies for not noticing the problem before - I am still getting a hang of how dataview handles subtasks) but I don’t understand why your solution works. Yay, a learning opportunity for me! Any chance you could share a screenshot of part of the results of the working version with the group by? Thanks!

Not a problem. I appreaciate very much your help.

I am making an effort to learn Obsidian because:

So I am putting some time to learn more about it.
But I am a structural engineer - not a programmer - and documentation/examples seem to be light or gear toward the more advanced users.

If you have any insight or can point me in the right direction to learning resources would be very much appreciated.

Thank you for your help.