[Bug] % and # symbols in .md filenames causes "File not found" error and hang when loading vault

I was getting a “File not found” error when opening a vault and Obsidian Mobile would hang and never load the vault.

Found the cause: some of my .md files had a “%” symbol in the filename. These weren’t causing a problem on Obsidian Desktop for Windows, but Obsidian for Android choked on them.

1 Like
[Bug] "File does not exist" when picking an existing vault
Opening a folder as vault fails with file not found error if a file has a hash # in its name
WhiteNoise July 9, 2021, 12:08am #2

Since you use third party sync service, you need to aware of the sync restrictions.

However, obsidian should not hang on load.

Also found the same thing with “#” symbols in file/folder names within the vault. Once I cleaned the filenames, Obsidian Mobile loaded fine.

Thanks for reporting. Upon further testing, I think there is a problem on our end. Both # and % are allowed on android. Be aware that if you use # in filepath linking doesn’t work well but that is another story.

Here is a screenshot of the error I was getting in case it’s helpful. It would hang here on my Moto G Stylus and the purple buttons wouldn’t do anything, although the purple progress bar animation was still moving. 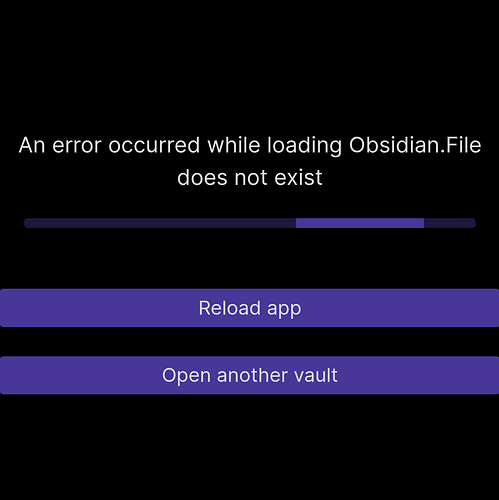 Don’t worry, I was able to reproduce the problem.

Hello, I want to add to the discussion that the symbol “?” can also cause an error. Hopes this helps.

I had the same problem pointed by @Leyeev.

Removing the ? symbols on the filename solved the problem.

I don’t think you have the same problem because the character ? is illegal on android. So you cannot have had a file with that name.

Weird. On Linux it works fine.

On linux you can have a file with ?. On android you can’t, try to create one with any app.
Whatever you are using for sync from linux to android, should skip (or rename) that file.

On Android, you can have files with % and # and we need to handle those better.

In Android the files with ? , % doesn’t work. So the simple solution is to modify the name of your .md files