Flickering of block reference embeds occur when a block reference source is from later down in the same file you are writing in because when you are above the source text, you are typing and adding characters and lines to the file above, which then is changing the line/character positioning of the source block. And that is how all the metadatacache is stored, tracked and managed in Obsidian with line positions and the character position to parse the text for the exact text/location. So the flickering is the quick re-rendering of the new block location (line/character combo) as it continually changes because you are adding more lines/characters above it on top of the file.

You’ll notice that instead when the block source of the reference is above (higher up in the file) that you won’t get the flickering because anything you type/add below is not changing the line/character position of the source block above since it is just adding to below the block location.

This issue makes it very hard / distracting to use block references from within the same file as the block reference embeds are consistently flickering as you type. I mentioned this to Licat in Discord and he acknowledged he understood my report.

My post on Discord with videos and screenshots: Discord 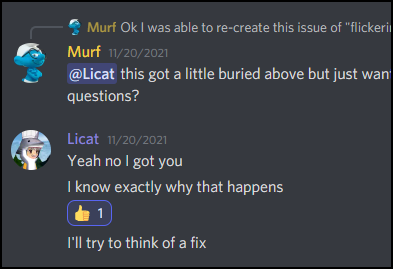