Is there an official API for this yet?

By API, do you mean plugin? If so, yes. Check the plugin marketplace available in the latest Insider build!

Yes i m ean plugin. Sorry that was a typo.

I mean I can

in the hotkey.
But I don’t see this as plugin. 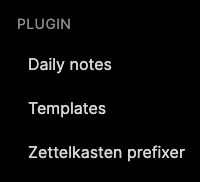 The pop-up warning upon disabling safe-mode in third-party plugins makes me wonder whether installing this is safe or not.

See Security of the plugins.

Got it to work. Thanks!

I was going to try to avoid plugins to have a more secure Obsidian, but this particular plug-in seems particularly useful.

Does anyone know the security of this plug-in?

This thread is for the (old) custom css version, which you can copy-paste into your obsidian.css
It’s pretty secure, because it’s only presentation stuff.

The plugin itself is over on a different thread and also only touches presentation stuff. However it does so via the javascript API, so theoretically I could change it in future to access all your notes (possibly more if I knew what I was doing

). If you are so inclined you can audit the code yourself on github, or you can choose to trust me.

Hi Scott, Did you ever decide on using plug in’s or not? I would love to add this feature as a css snippet for the same reasons.

Is it possible to have the title-container be in its original position (top) and only have them switch to the left-side when the pane is partially (like 70%) or completely outside of view?

If it is then please implement it if you can. Thank you!

(If not then just plain-old title-container on the top will also do since I’m on the css version).

That is something I want to do eventually, but it wasn’t possible with CSS alone, so will have to be part of the plugin version in future

Did you get this to work yet? I have the same problemo.

How about just moving the title-container to the top without having anything on the right? Can that be done with CSS?

Mike Caulfield, subsequent author of the influential The Garden and the Stream: a Technopastoral, Iterated on the Smallest Federated Wiki and created a WordPress-based plugin shortly thereafter called Wikity that used some of the card-based UI that Obsidian comes with out of the box.

Both had some early influence on the UI-based research that the IndieWeb space has done since. For those interested, there’s also a sub-group within it focusing on digital gardens, commonplace books, Zettelkasten, etc. that can be found here: commonplace book - IndieWeb

Could someone kindly hint me to where I find information on how to actually install this Andy Matuschak Mode?

It’s a css snippet, so go to Setting>Appearance>CSS snippets and look for the little folder icon over on the right. Click that and make a new file in that folder, with the code from here. Call it AndyMode.css (or somesuch - keeping the .css), and save.
Then in CSS snippets, refresh the setting (the circling arrows icon). Then scroll down to AndyMode` and ‘Enable’ the snippet (ie load it). BOOM! you should be good to slide panes back and forth…
nb - apologies if this is patronisingly hand-holdy for your skill level

no, this is not patronisingly hand-holdy at all, but just extremely friendly and courteous. Thanks you ever so much.

Could you kindly just link to the very text box I should take the code from?