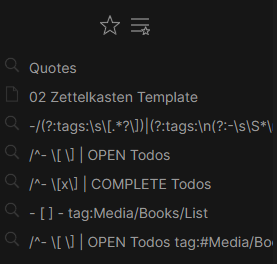 And that is just after using Obsidian for 10 months. Soon things can get cluttered. And meaning will be lost.

The first step would be to be able to name starred searches. This has been requested by many other users(Links below)

Right now starred pages, and starred searches are listed out together in chronological order.

What if we could have separate lists for either of them. Even better, the ability to add folders for starred searches.

Currently, I keep a meta-note listing out what each tag and each starred search equation in my saved searches means.

I am really loving the ability to star current searches in the insider build. I have multiple regex searches that I’ve setup to help me get around the vault. However, there is one basic problem. There is no way to name the search term. You need to spend some time decoding which regex does what. Having the ability to name starred searches would really make Obsidian a lot more powerful. For eg: I have a regex search where I can see all my todos, after starring it, if I rename it to Todo, it’ll qui…

Today I found out I can star searches, so I’d like to suggest that we can name them or add a description somehow. Right now a starred regex search looks like this: [image] As time passes or more regex searches are starred, it might get confusing to know what a search does. This is also helpful for non-technical or inexperienced users that are not familiar with regex. Perhaps some of the most common searches can even be added by default, e.g. Searching for notes without links (orphaned notes) R…

Couldn’t find anything, so here it is: