+1, its the only thing i think is missing.

As a workaround you could use : Typora like custom CSS
It is not perfect but was enough for me to switch day to day editing to Obsidian. The main weakness of this workaround is for tables, the rest is pretty strait forward.

What do people thin of “In-place” (as in Zettlr and bear) instead of “WYSIWYM”?

Can you describe what that means?

So an h1 heading is rendered as a heading, but still displays as “# Heading” 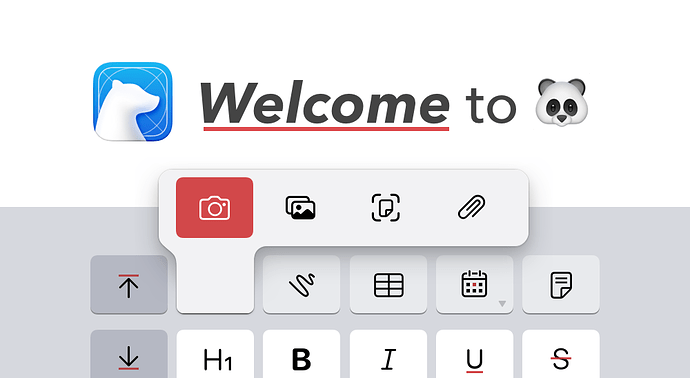 Panda is an alpha version of the new Editor coming in Bear 2.0.

I prefer this approach myself, and think obsidians approach will be perfect- three modes: plaintext, preview and WYSIWYM. I’ve seen the devs say that is the plan

+1 - I really just only would need images being displayed inline but a more viewable presentation during edit would be great.

Essentially I am agreeing with the “preview mode with edit feature”.

Typora is great but it is a jarring experience with all the content hopping around when cursor enters a link or image, the markup suddenly appears, and the current mouse-cursor position is now invalid. This is much higher “cognitive load” to me.

Bear’s Panda editor is a much better target to aim for. For instance, put the URI markup in GUI elements rather than the face-assaulting Typora expansion. Hopefully, the markup can seamlessly accessible to the preview through well design UX.

the whole point of it is to provide a syntax where the most common HTML tags for prose can be replaced by simple punctuation characters that are meant to be visible to the writer.
~Daring Fireball

As others have mentioned, WISIWYG should be in addition to the purist markdown experience. Personally I would still want the URIs hidden as they really just get in the way. When do you need to see the massive gibberish link (that’s longer than the sentence it is within) to the webpage you are writing about? Especially if you can view said URL with a keystroke.

Typora is great but it is a jarring experience with all the content hopping around when cursor enters a link or image, the markup suddenly appears, and the current mouse-cursor position is now invalid.

I use Typora regularly, and have done for the past 3 years, but have not had this experience. If anything, the “cognitive load” is less than with Obsidian because with the latter you have to keep switching between Edit and Preview.

Yeah, don’t get me wrong Typora is great and I’ve used it on/off for a long time; it’s my default app for .md. I tried others like Caret, MoU, Byline, etc but always went back. I just think, if Obsidian devs are building an equivalent, that they could aim higher. Have you played with the Panda alpha for instance?

Also, how do you deal with the problem I mentioned in Typora? If you have two links next to each other and near an image it can be frustrating to change middle links title for instance. Perhaps there is something I’m missing.

If you have two links next to each other and near an image it can be frustrating to change middle links title for instance.

I don’t have experience with this, I have not used links and images like that.

Another avenue to consider is something like the Gutenberg editor in Wordpress. This works on two fronts: it’s a web technology and would allow for future Obsidian editor features that are outside the normal scope of markdown. The embedded query block comes to mind as an argument for this. Could also open the doors for plugin devs to create “block-level” plugins.

This would be a great solution although I imagine quite a big job to implement. I’d be happy with just a typora-like interface in the meantime.
One great feature would be the ‘/’ command that you see with Notion, Craft, Wordpress etc.

If this is done, PLEASE keep an option NOT to use the WYSIWYM mode. I love the way the current edit mode renders things like headings in a different font but still lets you see the Markdown coding.

Usecase for editor|preview in separate panels. I am a teacher. I mirror the part of my screen that has the preview to the big screen that the students see. That leaves me free to see navigation options and comments that they don’t see. ie. They see only question; I also see answer.

It’s very good to know this feature was moved from “Long term” to “Short term” goal on the Obsidian roadmap last month. This will be essential if the software ever has any hope to be widely used.

This will be essential if the software ever has any hope to be widely used.

As amazing as it seems, not everyone likes WYSIWYG, so, whilst the feature might bring more users on board, the widespread use will not hinge on that.

This will be essential if the software ever has any hope to be widely used.

You are typing that on a Discourse forum with a markdown editor and preview window, quite widely used.
If Obsidian is ever as popular as Reddit, stack overflow, even vim or emacs, it will by any objective measure be “widely used.”

Yes, there is less friction in Typora. In IA writer you also have to switch back and forth. Having two windows open, one in editing mode and one in non-editing mode is also more friction. Typora mode cannot come soon enough for me.