A plugin to customize blockquotes

I was working on my notes when I felt the necessity to differentiate between a comment and a quote visually.

While it’s possible to achieve that (as seen in the screenshot) with html+css classes, I thought a plugin could make this more friendly, e.g. instead of having to write html in your note, you just write: 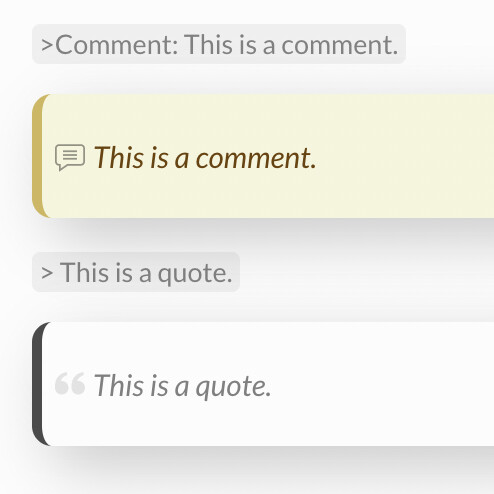 What do you guys think? Is that difficult to achieve codewise? Would that be useful for you?

P.s: I know that technically this may go against some frameworks for taking notes, as a comment could become another block of thought (separate note), but still I think one could make use of this for smaller ideas (even if just for early processing, note-to-self, etc)

P.p.s: Apparently this used to be possible with a CSS selector contains(), but it’s no longer supported.

Check out Admonition, I believe it does exactly what you want

Hey, thanks a lot for sharing this. It’s awesome!

I did search the community for something of the sorts, but I guess I got turned around by the title of the plugin.

Still, the code is somewhat friendlier than typing html, and there are a lot of options. It’s great!