Sorry I’m a bit visual. Do you mind doing a quick video tutorial?

I usually do not record myself but I tried my best and made a quick walktrough video.

Thanks for putting this together @Philipp . I must admit, there is so much confusion I have over all the tools and how to best use them. I benefited from your video. Just understanding that the citekeys were just an arbitrarily generated ID by the bibtex plugin helped unlock a sticking point of mine.

Any mendeley or jabref users here?
If yes, any idea if this style can be followed in these softwares?

@verma Maybe that is helpful.

Great to see someone sharing the same approach!
It is not so hard though to realize the function of linking to Zotero and automatically opens to the exact page of the PDF!
[MD name].(zotero link).
I really hope the hyperlink of Zotero can be automatically stored in Obsidian. I will honestly pay for this feature.

Thank you very much! This helps a lot!
What I am wondering: you mentioned the layout.yaml file as not necessary but it’d be great to know how to render the pdf as layout in APA or other layouts as well. Do you mind sharing the layout file oder where I can find layouts?

Step 3 can be simplified using Quicker.

Quicker is a useful tool and one of the script called ToMarkdown can easily translate note and link in html to markdown style.

here is the link of ToMarkdown

I’m not sure whether the website has a english version.

@tim_hilde With the yaml file you can configure the pdf rendering/layout. Mine looks like this:

You can paste that at the top of the markdown file as well.

It does not affect the citation style, this can be done with the --csl apa.csl option. Just choose the right .csl file from the zotero repo.

This configuration is pretty basic. There are full featured templates out there like this one, which convert markdown files to awesome PDFs and can be configured as well.

Just to add something to Philipp’s nice tutorial. It is possible to customize the citation keys generated by Better BibTeX. For instance, the definition [auth][year][shorttitle:abbr:upper] would generate a BibTeX key like Christian2015SYH, which consists of the last name of the first author, publication year, and the first letter of the beginning three words of the title.

Also, it is possible to rename the attached document in a combined way with Better BibTeX. For instance, with the naming convention {%b_}{%t} in the Zotero plugin ZotFile, the document can be renamed to “CitationKey_Title”.

Thats a great video @Philipp, thanks!

Slightly off-topic, but tangentially related to Zotero and Obsidian.

I’m attempting to take notes in Obsidian on journal articles I read and have been pasting the bibliography reference into the start of my notes. Just as a little time saver I edited a citation style to automatically create backlink brackets around each authors name.

See screenshot of my note template with bibliography pasted in with brackets. 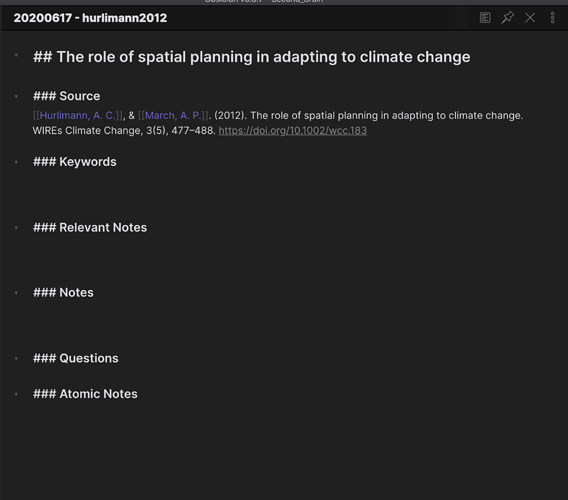 I agree. I also use Zotero and use the Safari extension and it is like magic.

Very interesting. Would you share the file, please? Also could you talk a bit on your note taking process on the articles you’ve read?

Little trick : you can upload the csl here by renaming it to .css

I’ve just used the APA standard, but it is relatively simple to modify any pre-existing standard, just need to find the correct spot to add the [[ ]] as both a prefix and suffix after the author names. (one hurdle I did run into was not being able to install it to Zotero, until I ultimately realised within the csl it was still named as APA, so Zotero was recognising it as already installed. So hot-tip for anyone that wants to modify a different style, make sure you rename the citation style (within the csl) to something unique).