Either in both examples or at least in one of them all lines would be rendered the same (grey background with a single “quote” symbol on the first line in the case of QUOTE with the default theme). This issue also occurs with the other callout versions (IMPORTANT, etc).

Styling is lost after the first line and only the first line of each example is rendered with grey background and the second line is rendered as a normal block quote. I can’t migrate to callouts in my vaults yet because I’m hitting this with many of my existing quotes and other callout use-cases for which I currently use block quotes. 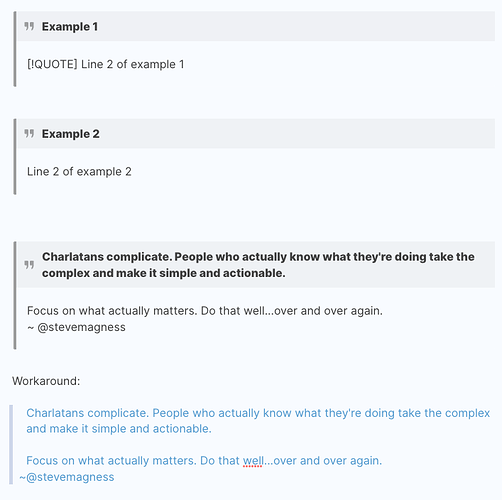 This is not a bug. I don’t think callout work the way you think.
I suggest you review the callout and quotations in the docs.

It’s hard to understand what callouts are when the documentation [1] doesn’t define what they are or what their intended use is. The closest to a definition I can find is this:

“As of v0.14.0, Obsidian supports callout blocks, sometimes called “admonitions”. Callout blocks are written as a blockquote, inspired by the “alert” syntax from Microsoft Docs.”

For someone who has never seen what is called “admonitions” or who doesn’t use Microsoft Docs, this definition implies to me that callouts are like blockquotes. After re-reading the docs I see that the first line of the callout is the title which isn’t easy to find.

Anyways, seeing that you think it’s my issue and not a doc issue by sending the bug to the graveyard before hearing back from me, I won’t bother with more bug reports, I find it frustrating trying to help because it’s not the first time.

I didn’t mean to be harsh, but the point is: if your don’t know what they are, haven’t read the docs, why do you think there’s a bug? Why don’t you post in the help section first?