Visual artifacts for tables in live preview on Debian Linux 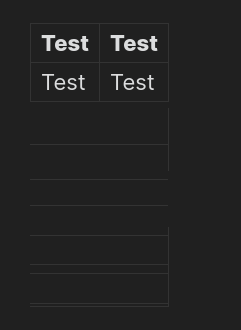 Use the following table with plenty of space above and below it to allow scrolling. Scroll up and down.

The visual artifacts appear only in live preview on Debian Linux. I couldn’t reproduce the artifacts on Windows 10 or Fedora Linux, which leads me to believe this is something particular for Debian.

Alternatively, this is due to my setup (running Debian inside a virtual machine), but no other graphical program has any issues and the artifacts persisted despite changing the graphical accelerator. I’m unable to test whether Debian outside a VM would produce the artifacts as it isn’t the host operating system.

I conducted some experiments and found out:

Live preview doesn’t appear to be the cause.

(there’s a callout above)

I don’t recall having visual artifacts months before, but I didn’t necessarily present the right situations for them to occur in either.

I’ll attempt to run a different Linux operating system inside a virtual machine to determine whether this is due to Debian or my setup. I’ll also try older versions of Obsidian in case I can find the specific update after which the artifacts started appearing.