For notes with aliases, if the same text elsewhere matches multiple aliases due to one of them being a substring of another, this feature request asks Obsidian only show the longest full match, or provide some workaround to avoid multiple duplicates: either show the longer one by default, or provide an option to only suggest the longest match.

Example below tl;dr Notes with alias AABB and BB, when I write “AABB” elsewhere, Obsidian currently would suggest both “AABB” and “BB” (partial match) as links to that note. But “BB” alone should not be in the unlinked mention suggestion, it should only contain “AABB”.

Background: I rely heavily on the unlinked mentions feature to discover links to other notes from daily notes instead of manually linking them. I would focus on just writing things down throughout the day in my daily note, and at the end of the day link everything by clicking the suggestions in the outgoing unlinked mentions panel.

Right now the behavior of Obsidian is to match for all aliases of the same note, and present all of them in some random order. This feature request is asking for an option to only suggest the longest full match for any specific note. Here’s an example:

Now this file is discoverable by Obsidian with all of the following keywords:

Assume now I write something in the daily note or anywhere else:

In the Outgoing Links → Unlinked Mentions panel, that would create two suggestions: 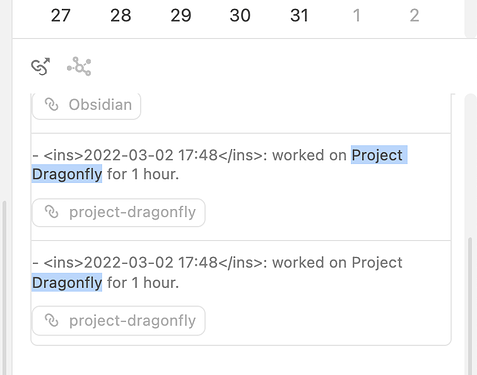 But there seems to be no reason for the second suggestion (only link Dragonfly and leave the Project) to exist. This would require additional attention / mental power while choosing amongst the unlinked mentions suggestions, with all those duplicate yet useless items.

In my use case, half of the items in the outgoing unlinked mentions are duplicates / substrings of the ones that I actually want to link, and I have to pick and skip them every day. The is especially painful in some non-latin languages like Chinese, where there’s no spacing between words, and no semantic word tokenization is done from Obsidian (could be another feature request).

When we have two or more potential mentions (say AABB and BB) to the same note due to aliasing, we do an additional check to see if one is a superset of another (say AABB includes BB as substring), and only present the longer one (in this case AABB).

There’s no workaround really, I just have to waste some time to carefully choose among all those options to manually pick the full match.

This feature (includes alias in unlinked mentions) was introduced in Obsidian Release v0.9.16 .

Agreed. Furthermore, it would be ideal if the unlinked mentions could ignore the keywords in tags, URLs, and PDF annotation files.

Noticed that it was detecting the keywords in URLs, tags, and PDF annotations, resulting in repeating loops of brackets.

I am working in two languages, English and Japanese - using aliases to link the two. It might be possible to use " corn ", which would cover “corn”, but eliminate “popcorn” or “cornbread.” Japanese does not have spaces in between words, so this is not an effective workaround.

How about an instead of “link”, perhaps an “ignore” button would solve this?

Pardon me ktf-9000. I took the liberty of adding ` ticks surrounding your urls, so the text formatting shows up, instead of rendering it as a link. I believe that is what you intended.