Create a note with this table:

Table should parse and render identically in Live Preview and Reading modes.

Current workaround is to escape the [ character. The following renders the same in Live Preview and Reading Mode.

-tip to @Valery_Kondakoff for report.

It’s definitely a bug but I checked the code and it’s going to be fairly difficult to fix. It’s a low priority bug so let’s have it tracked and we’ll get back to it later (though probably will have to be a few months). Meanwhile using the escape character is a reasonable workaround.

Not sure if this is related, but if I display task lists consecutively - e.g. where I’ve got tasks with different priorities, the first list displays fine, but on any lists below it, if the task contains a link I get some odd formatting with a random "> in it, and some of the text repeated: 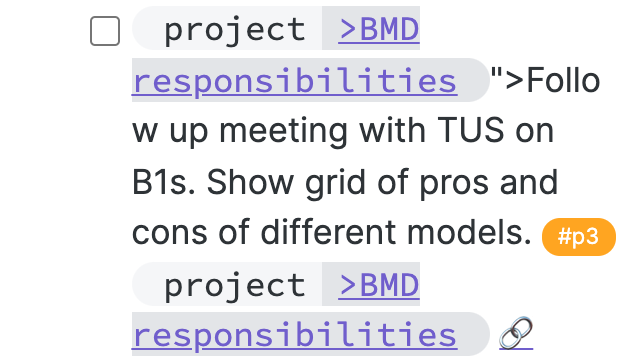 This is in reading view; in live preview it looks fine. My guess is that something isn’t closing properly within the html of the table above. Posting here because it only happens when the task has a link in it.