I rely on and appreciate this feature so significantly in my other apps! And I’m so eager to phase those apps out for Obsidian! 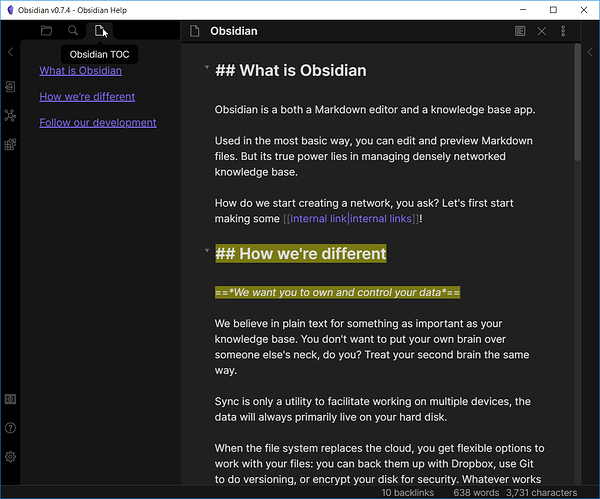 Oh My Gosh! Why can’t we have this yet? Taking soooo looong!

I can be patient

Just don’t want to be for TOC

Like you, I am eagerly awaiting this plug-in because I also want to move my other markdown stuff into Obs.

I am used to work with longer markdown files. For that reason it is always good to have an overview of the documents’ structure.
A table of content is a neat feature to have for quickly navigate through a *.md file.

I made the following mockup as my proposal how this could look like in the UI. 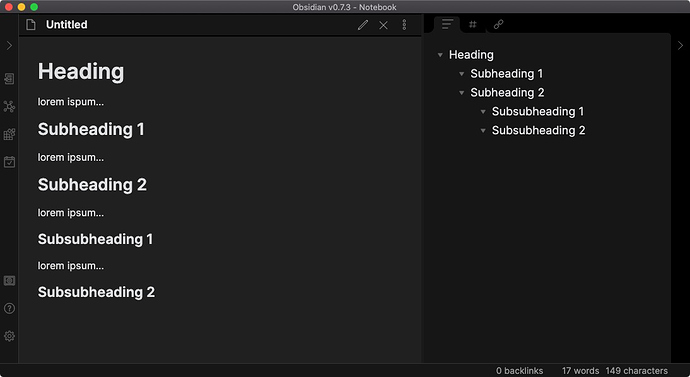 It is the beloved collapsible “Outline” view I am used to have in VS Code and/or Typora.
And I would also

to have this feature in Obsidian!

This view could be placed in the left/right sidemenu (I would prefer have it on the right).
So you could also hide it when you don’t need it.

In addition, the Outline view should also be usable in the “Slide” mode.
I did my first presentation for some colleagues in Obsidian a few days ago and they were very impressed. But I would be awesome to have a “TOC per slide” there.

you guys! Keep up the great work!

There is a plug-in request for this here.
@WhiteNoise

Oh…yes. but I think this is such an essential feature that it should be native and not as a Plug-In. Do you agree?

I had submitted the request as a feature, whereas @Dounm had requested it as a plug-in. @Silver then suggested to merge the feature request into the plug-in.

For me, like for you, it is an essential feature, but not everyone sees it that way, so I agreed to the proposed merger. At the end of the day it does not really matter, as long as there is a way to have it.

Just want to express my support for this feature. Also being able to toggle headings / bullet points in the Preview mode!

I know this late, but there’s been a way to do this that I was told about in the discord chat.

You simply add a # in the internal link, and then create your own TOC using that. Basically, like this:

Then, as you’re writing, you have to create headings with the internal link, as follows:

This will work to navigate inside a note, but admittedly it’s kind of tedious to set it up because when you’re writing the headings, you have to cancel the autocomplete and the brackets at the end shrink because when you put the # inside the brackets, Obsidian thinks you’re making another heading.

I don’t know who discovered this, but I’ve been using this solution and it works, but it could be improved!

and then create your own TOC using that.

How do you do that?

I believe he does it manually for every heading.

Even with a script to generate that, you would probably have to run it everytime to update it. It works but a core Obsidian feature would be the best.

Also not regarding it’s utility but notes with TOCs created like that become important in the graph vie[[]] as all those links count to increase the node’s size. Not a problem if you don’t really check the graph but still something to consider.

as all those links count to increase the node’s size.

Yes, as Meins mentioned, you manually type out the TOC. I just copy+paste the heading but it’s still tedious, it does increase the internal links, and I would love this as a built-in feature.

ToC in the sidepane has been implemented, which is great. What has not is the OP’s original request: to be able to type [toc] in the file (usually at the top) and get a ToC in the file.

Several feature requests were merged, with the focus on the ToC/outliner in the sidepane, so the OP’s original request took a back seat, it seems to me.

I understand. I think it’s better to open a new feature request specifically for that.

since the TOC/Outline has arrived with 0.8.1, can this post be closed?