This isn’t so much an issue with Obsidian in isolation, but on my Mac, I noticed that time tracking apps such as Timing, Timemator, and Tockler, are unable to tell me what specific file I’d been working on during time stretches spent in Obsidian. These trackers log both the active app and its window title, so with things like Finder, Chrome, or VSCode (like Obsidian, an Electron app), the latter tells me the specific folder, URL, or file I’d been working on. But with Obsidian, they just log the title as one long “Obsidian v0.12.5” abyss. Increasingly inconvenient when I’m billing my clients or doing my weekly reviews as I spend so much time in Obsidian these days for a myriad of projects both work and personal.

Thank you very much for the plugin. If anyone else needs it: 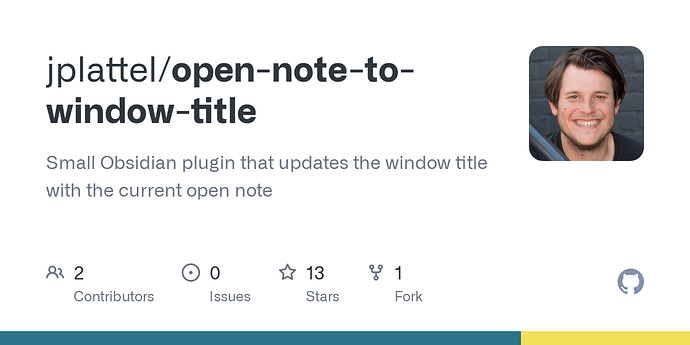 However, I will quibble that this is a bug. Why? Because we are talking about a behavior that is literally universal. Not common. Universal. If I were to tell you that ⌘C/⌘V doesn’t work in your app, that would be a bug. This is of a much smaller scale, but identical in nature.

I think you are being kind here

I have always worked on the principle that:

I still cringe at the number of times I was forced by ‘those who know better’ to release software with a list of known partial implementations only to be told by the consumer that it wasn’t working properly. I became known for my somewhat forthright replies under these circumstances.