I often write latex math into admonitions / callouts. Whenever I do so, however, the math doesn’t render in live preview:

despite the fact that live preview usually displays callouts that you’re editing as if they were quote blocks, which do render latex:

Just have live preview treat admonition boxes the same way it treats quote boxes and render latex in them.

If the math is sufficiently complicated that I don’t want to deal with not being able to see a preview, I sometimes write it first as a quote block and then only add the [!Proof] part when I’m done.

Are you certain that it does not work as expected? I have just given a try to the same block of text:

and it has been properly rendered in the Live Preview: 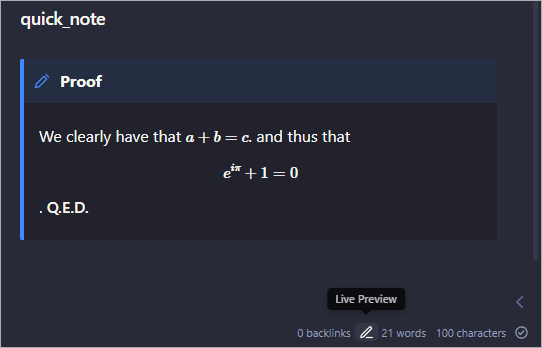 It renders it fully and correctly in the live preview when your cursor is outside it, but while you’re editing the admonition it displays in live preview basically the same way a quote block does, except for the fact that it doesn’t render the latex.

+1, I specifically came to the forum today to request this (I’ve been using the same workaround, too).