PDF - Zotero - Obsidian: Current state and collaboration for the ONE plugin?

Use GitHub - stefanopagliari/bibnotes to import it as a reference with all your highlights etc.

This makes the same link. It’s accessible on Mac but does not work on iOS or iPadOS.

I export a YAML record when I first add the reference, which I rename and change to .md

Dumb question, @ja_rule: How do you generate the YAML export?

@JBTaylor124
Dumb question, @ja_rule: How do you generate the YAML export?

From Zotero, select the reference you want to export. Right-click to pop up a context menu and select “Export Item…” about 2/3rds down the menu. This will open an “Export…” dialogue box, which at the top has a list box labeled “Format:”, which has ~20 different export format options. None of these are markdown, as far as I can tell, so I select “Better CSL YAML” and hit OK. If I then change the extension from .yaml to .md, I can open, edit, link, etc in Obsidian.

Why can’t there be a better built-in PDF reader and annotator in Obsidian? This would close a lot of the loops with the whole Zotero-to-Obsidian workflow. Just read and annotate PDFs directly in Obsidian, and then extract the highlights directly into Obsidian. Not sure why such a plugin hasn’t been discussed more

For academicians, we need the full suite of citation management functionalities and I am not sure obsidian’s dev time is best spent replicating otherwise relatively mature products like paperpile or zotero instead of ensuring obsidian interoperates with citation managers.

This thread is great, but, so far, it doesn’t really deliver on the second part of its title: “collaboration for the ONE plugin?” I guess that answers the question mark after “ONE plugin”… it is extremely difficult to build the one plugin that most people will be happy with. And there is nothing wrong with having many plugins around.

I am not sure what exactly the intention with the (yet unfinished) Obsidian Zotero Plugin is but since it seems to include both a plugin for Zotero and one for Obsidian, it looks like a promising project because maintaining both ends of the bridge in the same project probably makes things a lot easier for the user.

But what about the Zotero Integration plugin? Why hasn’t anybody mentioned it here? It has less than half the user-base of the citations plugin, but it is still significant:

Here are some other topics that mentions it:

Did you search the forum? I think I saw something recently either here or in Discord saying that Citations hasn’t been updated in a while and to use the Zotero Integration plugin instead (I might be misremembering exactly what was said).

Another plugin that might be worth mentioning here is Zotero-markDB-connect, which - in zotero - provides links to notes in obsidian.

The final thing I want to mention is a feature of Zotero itself that is easily forgotten when we talk about various plugins: Quick export. You can use it to simply drag and drop an annotation from the Zotero pdf reader into Obsidian and it will give you the annotation text + comments together with a reference to the source. If you hold shift while dragging and dropping, the reference will include a (deep-)link to the page of the pdf which, when clicked will open the annotation for you in zotero.

When I found out about this gen, my first thought was: do I still need any plugin now? Answer: yes, for references, but probably not for annotations. - It depends on how you work with annotations. If you simply want all annotations/highlights in obsidian, then a plugin is the way to go. But I’m trying to get away from hoarding highlights that I’ll never look at again, and instead distill from those highlights what I really want to keep in obsidian. And for that, dragging and dropping notes into obsidian seems like the best way forward.

Zotero is, then, a repository for notes and annotations that I made while reading and I can bring them over into obsidian once I actually want to do something with them.

I would like to have a full citation imported with the metadata section so that I can quickly copy it without having to go back to Zotero or another program to get it. Not in the sense of a reference manager, but because I might be composing an email and want to share the full details of the reference, or as part of a lecture draft.

I recently noticed the Pandoc Reference List plugin which is really great for having full citations at hand inside Obsidian while working with much shorter citations and links inside the markdown documents themselves.
It does rely on pandoc in the background, and kind of creates a bibliography in a separate sidebar pane similar to the local graph of a note.

As long as you do not need to regularly use different reference styles, this plugin makes it very easy to share references directly from Obsidian

Update on the obsidian-zotero project: the first public beta of obsidian-zotero-plugin is available for testing! The document isn’t complete yet, but you can find the installation guide here if you want to try it out: Installation | Obsidian Zotero

The plugin is still in beta, so please make proper backup for your data before and when using this plugin. If you have any questions or suggestions, please feel free to open a discussion or issue on GitHub: GitHub - aidenlx/obsidian-zotero: Obsidian.md integrates with Zotero, create literature notes and insert citations from a Zotero library.

Update on the obsidian-zotero project: the first public beta of obsidian-zotero-plugin is available for testing! The document isn’t complete yet, but you can find the installation guide here if you want to try it out: Installation | Obsidian Zotero

This is amazing. Everything seems to work smoothly. Excellent work! The annotation view is great. And I can’t believe that the annotation in obsidian updates when I change it in Zotero. Just like that, without me doing anything. (Comments and tags are not added after the fact, though - is this planned?)

But I there are two things I don’t quite understand:

This is amazing. I’ve been dabbling with it a bit and I think it’s fantastic.

There seems to be some wonkiness with the lit note switcher though.

Any idea what’s going on?

It will be nice to see it once it’s even more refined:

Thanks for making this!

These are just guesses to your questions:

Have installed and it has potential. I need to break I mean play with it more.

I think the Zotero add lets you click from Zotero into the related Obsidian note? (I haven’t used it though)

That would make sense. And I did find an item “Open in obsidian” in the context menu of zotero items, 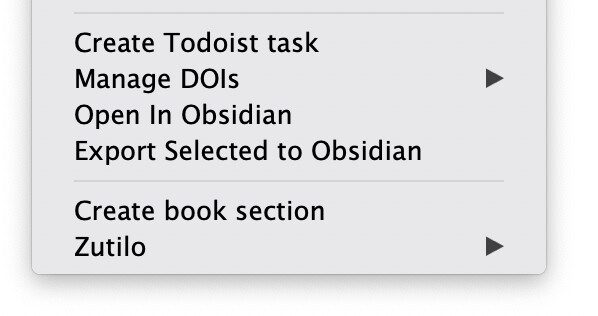 and clicking it brings me to Zotero but doesn’t open the corresponding literature note.

I also see that link in the 3-dots-menu of annotations: 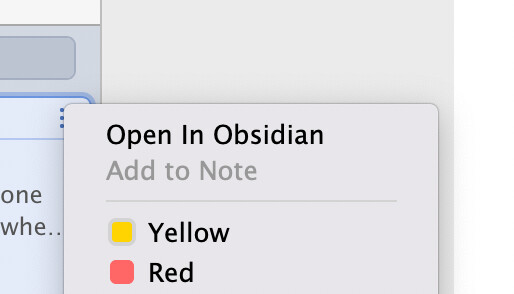 It also opens obsidian but not the note, let alone the annotation.

Obsidian supports block-level references by default and it creates that unique identifier once you refer to a specific block (i.e. annotation). So for that there shouldn’t be a need for those IDs. Besides: the IDs are “attached” to the heading for each annotation, not for the annotation itself, so that you can only use it to refer to the heading, not the actual annotation. And to refer to a heading, you don’t need any ^ IDs at all because you can refer to headings directly.

Here is an example (ignore the #3, I don’t know who put it into my screenshot 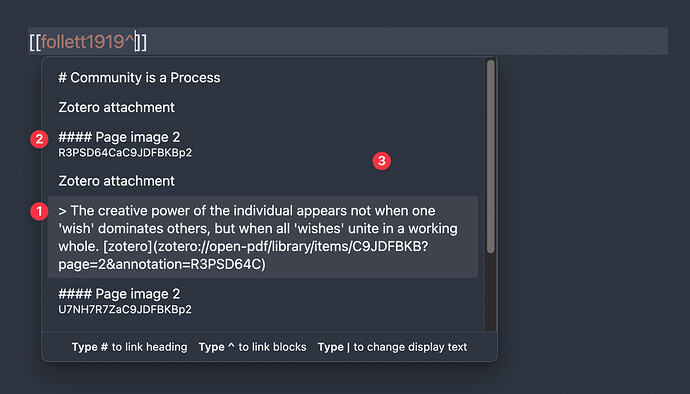 So, here I’m creating a reference to a literature note called Follet1919, by pressing ^ I open up available blocks to link to in that note, and as you can see, the annotation “The creative power …” is available as a block reference (#1). And so is, of course, its heading “Page image 2” (#2), but not because ot has a ^ ID but because it is s
also a block like any other.

I guess we’ll understand better as the documentation evolves…

After checking this and several other options out, including Logseq, Okular, the browser version of Hypothes.is, and landed on two applications

The first one is Liquid Text, it’s a very visual orientated annotating software that allows you to work on a canvas where you can drag and drop annotations that serve as links to their sources within the PDF. It allows export directly into the pdf as regular annotations and adds up the canvas as pages at the beginning, or export as a .docx document with the list of notes, if you get the premium license you can draw to connect things within the document and the canvas (as well as other PDFs). I am satisfied just with the free version, and am considering getting the license although the Windows version is really bad quality (because it’s originally an iPad software)

The second is Memex, as a web browser plug in, works pretty much like Hypothes.is, but it feel nicer, it has an option to export all notes from a source as markdown that you can customize, and my favorite thing, it supports easy YouTube video annotation with timestamps, so now it is extremely simple for me to just take a note on a video and have it immediately on my vault with all the links and formatting already in place

I love this update! It solves one of my eternal pains, which is seeing my colour-coded comments in Obsidian and making the annotations searchable! Thank you so much for working on this!

Some remarks, with the first one being the most critical for me:

Edit: I also realised that the screenshots within Zotero are not getting displayed in the viewer, but this sees to be the case in your demo video? 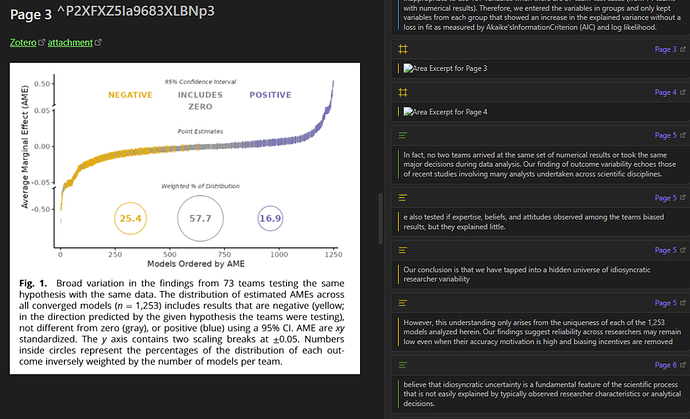 I’ve had the same problem with Quick Switcher, and could not figure out how to make it work. The citation key did not return anything either, the matching seems a little wonky. Did you manage to find a way to influence the results? 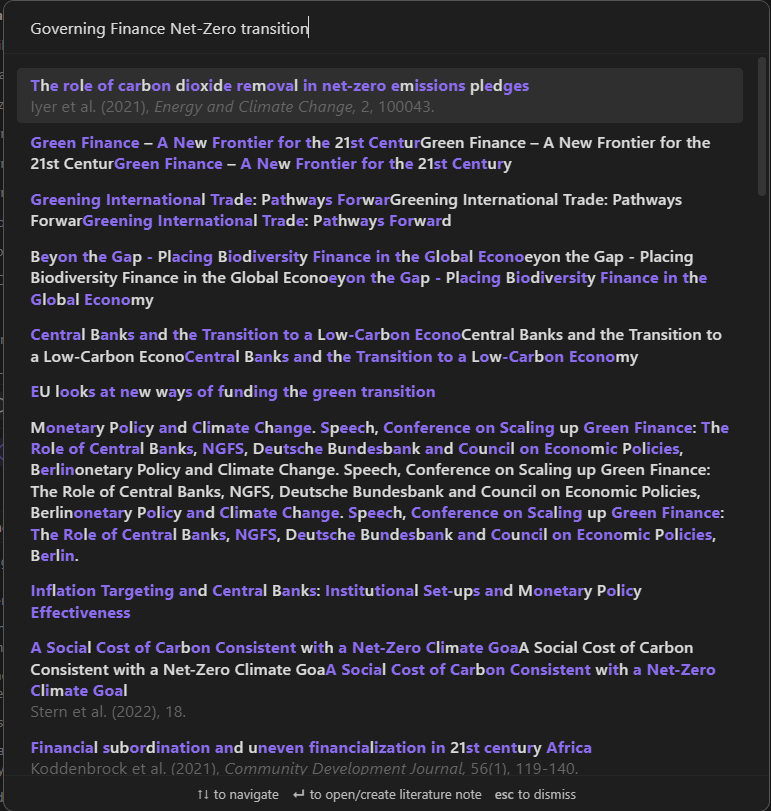 Do any of these plugins work with mobile? I switch constantly between my iPad while I’m on the go and my laptop.