Outline formatting is misleading/misaligned when only some nodes have children

Currently, this is rendered like this: (colored lines added for emphasis) 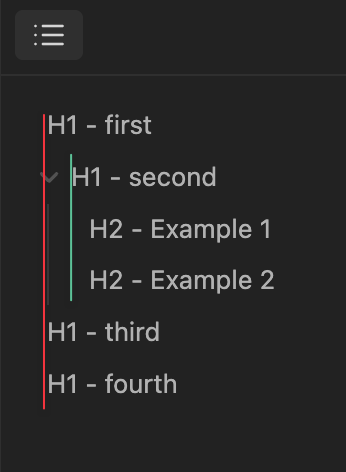 It makes it appear as if H1 - second is a child of H1 - first, when in fact it isn’t. I don’t know if this can be fixed with CSS or if it requires under the hood changes.

6 Likes
V1.0 Indentation Regression for Dropdown Arrows in Explorer and Outliner
Outline tree structure when using a mix of headings
Outline alignment in recent updating is bit of confusing
Move the expand/collapse icon to the right of tags in the tag pane
WhiteNoise September 5, 2022, 4:35pm #2

Feature request? why? this is a regression

We appreciate the feedback but we don’t see it a bug.

I don’t see myself as short

This is definitely a bug, not a feature. But if this is the Obsidian developers’ quirky way to prioritize, then I guess, so be it.

This is seriously confusing. And at least on Mac and iOS, it also goes against the system standard (see how Finder and Files do it).

Here’s a link to Ruq’s closed post on the issue:

After the v1.0 update, Folder/Outline Text with dropdowns (Folders, Headings with Sub-Headings) are no longer directly vertically inline. Instead, the dropdown is directly vertically inline. This creates visual difficulty in determining what is or isn’t on an indentation. That is, visually it looks like Items without a dropdown, and items with a dropdown, are on two different indentation levels, when in actuality they are on the same level. e.g. [image] Explorer: [image] Another Explorer…

today I found a article shows a way to use only css to achieve the good align tree view:

maybe someone good at css can work out a custom css sniplet with it, to give us peace of mind before this bug been fixed by obsidian team.

The problem seems to be fixed in note bodies, but not in the file explorer.

Here’s the snippet I was using. I’ve been meaning to try to adapt it to the file explorer, but maybe someone else (preferably the developers) will get to it first.

This is seriously confusing. And at least on Mac and iOS, it also goes against the system standard (see how Finder and Files do it).

It goes against how the file explorer does it on Windows, too.

Same level title should have the same indent 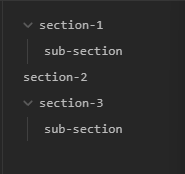 Are there any plans to change this in future updates, or does this post’s relocation to FR imply it was intentional and here to stay?

In my opinion, the outline has lost some of its value as a quick reference.

In theory, left-justifying the text of #H1 with the dropdown arrow of #H2 seems reasonable as you’re aligning the first character of each row, but that discounts the effects of visual perception. The text chunks are perceptually grouped because they share similar qualities (shape, spacing, color, etc) and those groups are interpreted as vertical lines… lines which are no longer straight, which doesn’t accurately convey the hierarchy.

The devs use a narrow definition of “bug”. There’s no guarantee this will be addressed, or addressed soon, but if they rejected the idea it would be closed, archived, or moved to Help.