Obsidian appears in taskbar but will not open (Dual Monitor Unplug)

Since Obsidian automatically upgraded to 0.9.6 today I can no longer use it on my desktop (though it works fine on my laptop). The icon is visible in my taskbar but if clicked nothing happens. I’ve uninstalled the program, restarted my computer and reinstalled the program but to no avail. Interestingly, the “Help” vault opens, just not my vault (which is saved in a Dropbox folder) Please investigate and fix.

Obsidian window does not appear on desktop (thoug a small image of one note will appear just above the taskbar if I hover over the Obsidian icon). 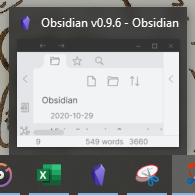 Is it possible that it is just out of the viewable area of your screen?

How to Move a Lost, Off-Screen Window Back to Your Desktop

If you’ve ever had a window somehow get moved off your screen, you know it can be frustrating not being able to drag it back. We’ve got a couple of ways you can move these rogue windows back to your desktop, though.

Tried that. I do have two screens but Obsidian does not cascade when I followed the instructions mentioned in your post. Upgraded to 0.9.10 and still having the same problem. Got rid of the task bar to see if Obsidian was hidden behind it but it was not.

Interestingly, the “Help” vault would open so I deleted the reference to the vault I wished to open then opened it again as a new vault and it opened so this seems to have been a mapping error that occurred during the prior upgrade and carried forward. Seems to be working now.

I would expect the vault to either default to the remaining screen or respond to the windows snap commands.

The window does not appear on the remaining screen. Though it appears in the ⊞+Tab screen, it does not respond to any snap commands, either from the keyboard or the Task View. Until you reattach the second display, there appears to be no way to access the vault through Obsidian. I have not tested if this issue persists after a restart.

This is on a laptop with dual GPUs (iGPU and dGPU), and the monitor is connected over HDMI through a DisplayPort 1.4 connector.

I installed latest Obsidian (after uninstalling to try and fix), open the application from desktop and then it appears as active on taskbar, yet the window appears to be off screen somewhere I can’t reach, I am able to open the folder browser, but when opening the vault it goes off screen.

Expect to be able to use Obsidian on my desktop with dual monitors when I open the icon after installing.

Right-click on the Windows taskbar and select Cascade windows from the pop-up menu.

I didn’t try Whytenoise’s solution above but had the same issue as you. Cascade didnt work.
It appears that the program remembers the position on the screen where he left off. My Test and Help vault was visible, because I close them on the main screen, but the 3rd vault is not.
My solution was to plug in the 2nd monitor, drag the 3rd Vault window from it to the main window, unplug the 2nd monitor.

@WhiteNoise I tried cascade windows but it did not work, @Glisha suggestion worked for this issue.

The window was on an inactive 2nd monitor screen, to the right from the main monitor, but because I switched positions of monitors, now to the left from main monitor.

I have had this issue. I have a dual monitor setup with laptop closed. If I use the laptop on its own and open Obsidian I too cannot see the app as it is on a monitor that is not connected. I have discovered that I can right click on the taskbar select “Show Desktop” then right click the taskbar again and click “Show open windows” to bring it back onto the active screen.

This solution by dunxhg worked for me! Yep, appears to be related to a disconnected monitor. In my case, I had reconnected the old monitor (so connected to all monitors), but was connected via a different port (on laptop rather than through dock), so the screen had different footprint/metadata.

May be worth it for the team to have some sort of check for the monitors, and whether a monitor is still connected or not? This workaround is great for users familiar with these forums, but less resourceful users might get frustrated enough with this that they stop using it (even I admittedly started using another note manager for about a day).

Hi everyone,
My obsidian window is also located off-screen, and nothing suggested has worked to get it back. When I alt-tab, I can clearly see the open vault - but I haven’t been able to re-locate the window back onto the actual desktop.

Because the window is open off-screen, I can’t use Obsidian at all. It’s driving me crazy.
Is there a preferences folder somewhere that I can wipe so it opens fresh on the main desktop.

This is a pretty big issue, so hopefully the team can find a solution soon!

if you’re in Windows, could you press windows+shift+arrow (right/left to your main screen)? It’s a way to relocate the window back.

Thank you!!! I thought I’d tried this but I must had been hitting the wrong key command.

I am also having this issue on Windows 10; the second monitor is my iPad (connected using duet air). Every time I open my vault now it is off-screen. The only way to fix it is to repeatedly connect my iPad - cascading does not work, nor do any other common fixes. A workaround I have to do every time is fairly unsatisfying. I have had similar issues with other apps in the past, and the solution has been to hover over the app on the task bar then right-click the preview and hit restore. This action is not available on obsidian as the right click does nothing. This is a very frustrating issue, I would also like a way to force a reset of the display location menory.

Had the same issue and indeed “Show Desktop” then right click the taskbar again and click “Show open windows” did work for me. Cascade windows didn’t!

Hi folks, I got the same bug happening on Windows 10.

I didn’t solve it with above suggestions, instead I was lucky enough to be able to plug in my second monitor again to get the window back.