Plenty of us store markdown files in multiple directories such as myself. This could be because they want to switch between directories, or have a encrypted directory open along with another directory at the same time.

The “vault” in the file explorer (this thing, that isn’t pixelated: 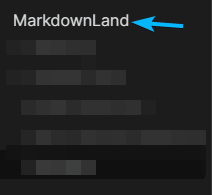 ) is movable, meaning other directories could be additionally added to this menu and possibly be collapsable.

Without a feature to quickly switch in-between directories on the fly, this becomes a hard sell from a previous Typora user.

Support for multiple vaults is on the way.

I still dont have a clear idea of what the vault actually is. Isnt it like any other normal file with .md file type ?

I think it’s just what they are calling the folder that contains the collection of .md files you want to work with and then it adds .obsidian folder for app utility.

The idea of encrypted partitions would be great. The ability to have parts of the the network of notes be scrambled until a password is entered would allow sensitive data to be integrated into an existing network of notes. For example, all the links to notes could remain the same but the content would be scrambled.

Hi, Will it allow back-linking and tags across vaults. Please do share your understanding as it will help to plan my Obsidian structure better.

Support for multiple vault has been implemented.
There won’t be support for backlinking and tags across vaults.
Vaults are separate entities.

Is it now possible to open multiple vaults in parallel ? e.g. working with a personal and a public vault, located on a network drive in parallel ?
Moreover it would be great at least to use backlinks as well as tags across different vaults.
Please think about to implement this functionality. This will be very helpful for collaboration with other people e.g. on a network drive and using personal notes on a local drive in parallel.
Thanks in advance

Could this be be a plugin? What if you were able to link to other vaults by using a prefix… ex. [[Contacts–Jordan S]]

+1 for multiple vault support for backlinks, etc. There are some situations where it’s ideal to have separate vaults and it would be nice to be able to make reference links to the other.

+1 for link support across multiple vaults

I agree that link support across multiple vaults could be very powerful and helpful. However, I think this feature should be optional, and off by default (i.e. opt-in). If links b/w multiple vaults are on by default this begins to defeat the purpose of having separate vaults in the first place. (There still might be some reasons why, but my point is it blurs the lines so much that it makes it as if the two vaults are one vault anyways).

A lack of links between vaults is actually a feature, not a bug. However, I think it should be an optional feature. There are times when the user doesn’t want links and this is part of why they made a separate vault in the first place.

For example, I have a vault I’m building called Second Brain. This vault is meant to be my “everything” vault.

I’m also creating a Bible Study vault. I’d like this to be separate because when I’m making links in my bible study research I don’t want to get suggestions to links to unrelated things. I want my Bible Study notes to analyze and index the bible without being cluttered by other topics. This is a good use case for having a separate vault. By having a separate vault, I don’t get irrelevant suggestions in my link code completion or in the local graph view.

However, in my personal notes, sometimes I want to reference something that I read in the bible, and it would be nice to be able to link to it. This is why I’d like linking across vaults.

That being said, it could be challenging to implement as it would probably create a bunch of broken links within Obsidian. How would Obsidian know which file to link to, if it’s in another vault, i.e. another directory, maybe even another drive, on another network. This adds quite a bit of complexity and opportunities for bugs.

I like @ecosoc 's idea of making this a plugin (therefore it could be opt-in and won’t confuse casual users).

And I like his idea of linking using a prefix for the vault like [[Contacts–Jordan S]]. But I think that that would be a problem if there is a note in the same vault that has that name. The syntax should be something that couldn’t accidentally have the same name. Maybe something like [Vault:Contacts[[Jordan S]]] That’s kind of ugly and verbose, so there’s probably a more elegant idea for syntax, but something maybe like that.

Is there a specific time plan when multiple vaults in parallel will be available?
Thanks for your efforts
PW

Sorry I just recognized it myself
Thank you