I am new to the idea of MOC’s and I have read that others on the forum are struggling to understand what they do etc. Below is my attempt to understand MOC’s and why they are so useful.

If we take the folder structure, I view it as a top down hierarchical structure. Very good at narrow focus, never runs out of space but poor at connecting multiple things to other things and showing the bigger picture or overview. I see the symbol of this as a vertical triangle. 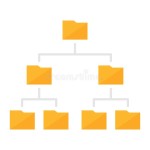 The mind map or network on the other hand is co-planer, everything exists on one plane,there is no hierarchy to speak of. sure you can enlarge a node, make it a color to stand out, adjust the size, but it still remains basically flat. Characterized by very broad focus showing well the big picture, how things relate to other things, but doesn’t lend itself to fine detail. I see this as best symbolized as a horizontal circle

I introduce the shapes for easy visualization and to further emphasize the polar opposite nature of these two methods of informational display.

If the vertical triangular hierarchy of the folder structure is the thesis, then the co-planer horizontal network mind map is the antithesis.

The synthesis then I suggest is to join the two shapes together which then forms a three dimensional cone shape. This is achieved using Maps of content

The above illustrations are the closest I could find for my purpose, but its not perfect.

The MOC or ‘hub’ therefor introduces a vertical aspect into the network. At the cost of trading some of the properties of the horizontal network for the properties of hierarchical folder type information display. We strike a balance, a best of both worlds solution

The amount to which a vertical aspect is introduced i.e. levels or tiers in the map/graph through MOC’s/hubs, and the amount to which the horizontal co-planer network aspect is maintained, determines which ‘informational display’ characteristics predominate.

isn’t it more about enabling a poly-hierarchical structure, where a child can have multiple parents

To me any hierarchy can be drawn as a network, usually part of a much wider network. So a hierarchy to me is a subset from a network, drawn in a specific way and often with defined connections. (And it doesn’t preclude any of the nodes to also be part of other hiearchies, based on other subselections or types/interpretations of connections). New insights can occur if you spot an emergent structure in a collection of networked info-items. Then a hierarchy suddenly stands out. I see MOC as expliciting that, or as a way to tease those things out, a tentative MOC at first, an emergent outline, that solidifies into something specifically meaningful to me (not necessarily to others).