Moving the mouse pointer across the screen to find the relatively small > and < icons used to toggle sidebar visibility slows down processing and impedes fluidity.

Make the entire sidebar surface clickable. If a user clicks anywhere on the sidebar except for a button the sidebar visibility is toggled exactly as it is when clicking the > or < icons. Clicking on one of the sidebar buttons would not toggle the sidebar but would only activate the command associated with that button.

Additionally it is far easier to throw the mouse cursor against the side of the monitor and click to toggle behavior than it is to hunt for the small icon.

This aligns with Fitts’ Law which essentially says that the difficulty of user interaction increases with the distance and inversely with the size – moving a longer distance quickly to reach a small target (> / <) leads to errors.

This results in the user slowing down to accommodate the design, rather than the design accommodating the user.

Put simply, Fitts’ Law states: “…the time to acquire a target is a function of the distance to and size of the target”. As the distance increases, movement takes longer and as the size decreases selection again takes longer.
…
Command buttons and any other interactive element in the graphical user interface must be distinguished from other non-interactive elements by size. Whilst it may seem obvious, user interface design often ignores that the larger a button is the easier it is to click with a pointing device. As interactive objects decrease in size there is a smaller surface area, requiring a level of precision that increases selection times.

The outer edges and corners of the graphical user interface can be acquired with greater speed than anywhere else in the display, due to the pinning action of the screen. As the user is restricted in their movements the pointing device cannot move any further when they reach the outermost points of the screen; fixing the cursor at a point on the periphery of the display.

The aim of user interface design should be to reduce the distance from one point to the next and make the target object large enough to enable prompt detection and selection of interactive elements without sacrificing accuracy. One particular aspect of this is ensuring that users are able to click anywhere on an interactive element to carry out the assigned action. 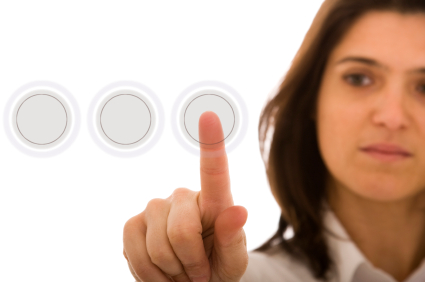 Fitts's Law: The Importance of Size and Distance in UI Design

In Human-Computer Interaction (HCI), Fitts's Law is typically applied to movement through the graphical user interface using a cursor or other type of pointer.