How do you use UIDs?

I’ve been on a long journey with UiDs.

When I started using the archive, I hated them, but eventually gave in. I wanted to try the method as the creators were using it so I could fairly evaluate it.

At first I hated them, because they junk up the filename with non-readable garbage.

I saw the light when I started linking to notes from within paragraphs using only the UID in brackets. Much cleaner than including the whole filename inline.

Then I got used to them. And they represented a finishing touch. It signaled that a note had grown up into an official zettel.

Anything with another format of file name was easily identified as a raw, unprocessed note.

However, the UID-only links don’t work in other apps.

To @nickmilo 's point, these automatic filename fixing features might become standard in text editors moving forward. Negating the need for a UID on every file.

You could still use a UID if you didn’t have a good name for a file, but you wouldn’t need to.

Also, if there ever comes a point where an export was needed, and a unique ID was needed, I’m sure something could be scripted to make that happen by using the file’s creation date.

All of that being said. I’m at a point where I am rethinking everything.

I do like the uniformity of the file name structures. Looking at the collection of files, they look nice and orderly and polite. And I like that they separate the riff-raff from the zettels.

But I don’t want to do it unless it’s in service of real, practical, utility.

But I don’t want to do it unless it’s in service of real, practical, utility.

This is the real practical utility -

I do like the uniformity of the file name structures. Looking at the collection of files, they look nice and orderly and polite. And I like that they separate the riff-raff from the zettels.

What you say suggests that the lack of such visual order niggles your mind, reducing your ability to focus.

Very insightful @KevinR. The Date Timestamp UID is such a compelling solution for a unique identifier that it makes it difficult to ignore or at least begs you to take into consideration when deciding to use or not use it with your Zettelkasten. It can be a burden and a benefit. What do I gain using it, what do I miss out on by not using it? With all the struggles for getting started with the Zettelkasten Method it creates a lot of angst. It did for me. I use them at the beginning of the file name as a convention. It is habit now. But I still find myself asking do I really need this. Your point about it representing a finishing touch is a good one.

I do like how Obsidian is giving me a fresh view of how I setup and use my Zettelkasten. Obsidian feels good working with my notes. It has me reconsidering conventions I thought were settled. It is nice that Obsidian works well with or without UIDs.

It won’t allow you to name a file the same.

yes I’m being pedantic and get what you mean (Time IDs vs. Word IDs).

Looks you went the other direction while working on your theme with UID only file names, What was that all about? Test data? I have been curious since I saw that. 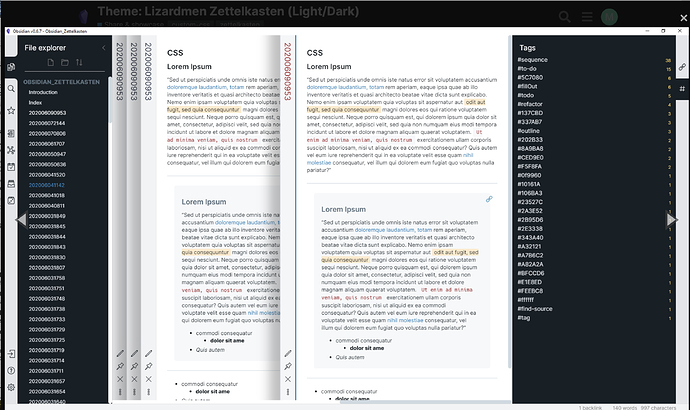 @Mike ya I’m experimenting with titles. Haven’t landed on a preferred format yet. Direction I’m currently going in is with some notes having just a TID and some having a TID + traditional title combined.

The funny part is my public zettelkasten uses luhmann IDs

. On my to do list is to collect a bunch of the discussions from various places on IDs, synthesize them to a degree and then think about IDs using my layers of structure framework and the core note functions.

If you’d like I can try to remember to mention you when I create a note sequence on IDs.

Would this idea work?

So, one of the things I’ve stumbled on with Obsidian, is the ability to replace rigid folder structures with links and backlinks. I find this concept to be freeing, however I fear I’m going to run into the natural limitations of my imagination when it comes to file names. I can easily see the need for scripts that I write to have the same name, but to keep them separate, I would need to name one of them slightly differently, and that may have other ramifications as far as linking and backlinking…

Rather than zettelkasten auto titles, having this as an available stamp would make it easy to have as a note title, but could be inserted anywhere in a document for easy linking. As is, it shows only the words but prompts for a new file.

If you don’t want to do that, but only have it as a marker in a file, you could precede it with <!–
And it would disappear from preview but still be searchable. And that could easily be reversed if you decided you did want a new document.

I saw the light when I started linking to notes from within paragraphs using only the UID in brackets. Much cleaner than including the whole filename inline.

Then I got used to them. And they represented a finishing touch. It signaled that a note had grown up into an official zettel.

Anything with another format of file name was easily identified as a raw, unprocessed note.

Interesting… I’m new to this and was leaning toward doing the opposite. Naming and filing a document is a fraught decision that I often avoid by saving work in progress to the desktop as “asdfasf.doc” when I leave work and forgetting about it the next day.

Having a timestamp as the default reduces the friction of creating a note. Once the note has matured enough that I know what it’s trying to say, I can aspire to rename it with a declarative phrase as recommended by Andy Matuschak.

But I could see how a UiD only might be less intrusive when writing. Has anyone used their zettels to compile a draft? Were the links easy to clean up?

Obsidian allows to link to headings in the document using syntax [[file#heading]]. It will even suggest the headings in a file when you press # after picking a file in the suggestions.

I’m in the exact spot right now: I use [[UID]] links in my Zettelkasten in The Archive, mainly for readability but also since that doesn’t break links should I change the title and file name of a note.

But that also means that moving my Zettelkasten into Obsidian is not as easy, since my current links doesn’t work.

How did you solo ever this, @KevinR?

Obsidian will change links if you change the note title. And I think (crossing fingers) that this will become a common feature in other apps. I’ve also been slowly getting rid of them on my old notes as I work with them.

Someday I might be sad, but I’m tired living with practices that make my everyday experience worse in the name of avoiding a hypothetical problem in some hypothetical future.

I have thought about appending note titles with a UID for the purpose of avoiding duplicated note titles in the future. But I haven’t been diligent about it…still on the fence.

Hmm. Don’t know if I’m ready to do the same. But, on the other hand, I have (and can continue to have) my UID in my YAML frontmatter. If I get rid of the UID from the file name for now, I could easily revert that change with a script should the need arise again.

That’s a good solution. I keep meaning to think about what YAML could do for me.

One thing I like about Obsidian and the community here is that it is much less dogmatic. Experimentation and exploration is celebrated, and is rarely met with a condescending response about why what you’ve chosen to do is “wrong”.

I’m not so concerned with what others think is “right” or “wrong” as I’m concerned with changing a information structure that has served me well for the last couple of years and as I want to keep that way for many years to come. That makes me hesitant to change fundamental aspects of how I work – and this is really one of them.

Yep. I totally get it!

Hello. I’ve discovered Obsidian for these days and I have the same doubt.

Some issues i had.

Using identifiers will disturb the graph view that for me it’s very important. You will have a great amount of numbers linked, not concepts connecting with each other.

Has anyone experienced this kind of problem?

Good example! Was wandering exactly the same when I read this thread…
Suppose you’ll have to do a search for “fermentation”
Then the note will pop-up in the search result after which you can reference it in the pizza note.

Unless there are other/better ways to achieve this in Obsidian.

Auto completion also works when you have UID + Note Title, i.e. “202009081517 - Natural Fermentation”. As soon as you write [[natural… the note will show up in the auto completion.

Using UIDs only as titles really would make the whole benefit of auto completion obsolete.