Many people running their knowledge systems in obsidian create note classes (People, Project, Article, Video, etc.) are forced to use the weak functionality of textual YAML.

I think there needs to be some discussion and in-depth work on the use of YAML tagging, which will not damage current systems and allow to be as flexible in its architecture.

What functionality it should have: 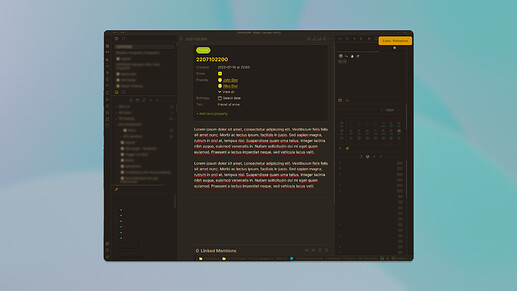 I like that there are alternatives to Frontmatter in the form of inline fields dataview, and I am looking forward to YAML frontmatter improvements (Roadmap)

At the moment we have bunch of plugins that try to deal with fronmatter and inline properties:

I like the developing standardization in https://hash.ai/ with https://blockprotocol.org/.
They are trying to solve the same problem for the future of web and product development.

As I said in other threads, YAML block was not meant to be users directly by the users but a place managed by plugins. What you listed is not a workaround, it’s the solution.

The rest is added by the plugins and should be managed by them.

Side note: it seems that you want something like this “database folder plugin”

Kind of, I like the idea behind this plugin.
But ideas is to the ability of managing note types and assigning values to precreated properties with autosuggestion (metabind + metatable plugins).

I think with that plugin, and also manually with the other plugins you mentioned, you can create a “note type”. Have that note type be associated with a fixed number of note attributes. Have a set of values associated with a specific attribute.

Super nice tools you show there @Cogscides, and exactly what i miss in Obsidian. I need the structure and typing that comes with notion, visualize the connections, create dynamic tables that I can edit, have different views on my data. I realize I have a data-centric workflow.

The reason i’m still in Obsidian is that I like the datas to be entered into natural text, having notes that are both human-readable, make full sentences, but where the semantic can be parsed. The idea of openblocks seems to be somewhat around that. I like that liberty that i can value my variables anywhere i want inside the text. Maybe the front-matter should just be a summary of the valuation i give in the text and work in both directions.

What i’m not ok for is the PKM system being just about taking notes and having simple links… and have all the real PKM related functions left to plugins… like variables, types, semantic, semantic search, even data query, there is basically very little PKM inside the core, beside having a markdown editor. I’m in search of a more opinionated tool. So thanks for bringing up those fresh ideas !

Thank you for commenting. I really like what an ecosystem growth around obsidian, but we still haven’t powerful handy tools for managing our note typings(metadata).

Nice mentioned that all PKM tools left to plugins, but having built in functionality for managing metadata need to be included on base level, imho.

Now we have bunch of plugins that are complex to newcomers and have bad UX for advanced one.

If still suppose this for community development we need to have some guidance from core team on future vision of the product. As it’s really complex feature for plugin developers as on the moment we have 5+ plugins which try to deal with this problem.

Exactly that’s the conclusion i draw in almost every discussion thread, as even those with top replies numbers don’t get any commitment as to “yes we may do it in the future” or “no this doesn’t fit the design we want to get to”, there is basically no clear indication as to where the tool with be heading or not, I would prefer a clear “no” than no answer. The roadmap only features little technical tasks and nice to have and not any core direction or vision.

A PKM tool should have the PKM stuff in the core so plugins can extend it. When it is left to plugins to actually implement all the PKM stuff, not only they don’t benefit at all from anything core, but they all left to “standardize” things by themselves, and for themselves, that won’t integrate into any of the core product functions like the graph or the search, might break or become unusable when the plugin stops, and will be hugely imcompatible between each other.

Now I learn in this thread that the front-matter improvements are just to offer a place managed by plugins, so in the end the only thing that gave obsidian a bit of parsable semantic information about a note also belongs to the realm of the plugins. So more than ever i’m waiting for a roadmap / blog post about the vision and direction obsidian will take for the years to come (long term), what they consider as a core feature or not (related to PKM functonality and semantic), and on topics that are years old at least a feedback, what good it is to have a forum for suggestions if they stay open for a year with tons of comments and yet there is no feedback.

I may sound quite annoying but obsidian is the very reason that opened my appetite for more, i didn’t know that kind of software before, and kuddo for the developpement. I totally understand the right of developpers to choose where to head their software to, and the limitation in man-power toward implementing stuff. But I think there is a growing competition in this market, and a lot of confusion in the user base and commercial claims, and the best way to dispell it is to be clear about what design phisosophy is followed and what will, may or will not be part of it.

you do realize that Obsidian is version 0.15.6. Lots to do for the program to get to
version 1.0. Also, at its bare basics, Obsidian is a plain text editor that uses Markdown, is extensible, and works on just about any Modern Operating System. Many users have adapted it to do Personal Knowledge Management, but that’s in addition to the plain text writing system that it is at its core.

Version numbers don’t matter, as long as the roadmap doesn’t tell anything about what’s the featureset even targetted to be version 1.0. This could very well be the version 1.0, or far from it, there is no clue, the long-term roadmap is empty, so it could be just it, that’s my main concern.

You claim that Obsidian is a markdown editor that users adapted to do Personal Knowledge Management, but this opinion contradicts the statements that Obsidian main pages says about itself : a second brain, a powerful knowledge base.

So don’t get me wrong, I have no problem if they clarify that they are done with feature and aims to just be a powerful editor and the goal is reached. I’d be thrilled if they announced they have a long roadmap of feature to 1.0 and it will take years to get done. But right now there is no clue toward one or the other, no feedback even on the most popular feature request threads… It’s the only product at the moment that has an empty roadmap.

And the simple fact that you have a different interpretation about the product than what is stated on the product webpage itself shows that the target is unclear as to what the product is, is not, will be or won’t be in the future. Extensible markdown editors are plenty, tools with links are plenty, personal knowledge management is much more specialized and rare and if they choose to leave all the PKM job to plugin and the main product just being the editor, I prefer to know sooner than later.

Exactly that’s the conclusion i draw in almost every discussion thread, as even those with top replies numbers don’t get any commitment as to “yes we may do it in the future” or “no this doesn’t fit the design we want to get to”, there is basically no clear indication as to where the tool with be heading or not, I would prefer a clear “no” than no answer. The roadmap only features little technical tasks and nice to have and not any core direction or vision.

There is a small roadmap of what is committed to happen in the future. Without specific deadlines. You may like or not like what is in it. But it is what it is.

You are free to have and express your opinion on what a PKM tool should be. What feature should be implemented but please understand that your ideas may not be shared or prioritized by other members of the community or dev team. Nagging won’t get you what you want and is displeasing to be on the receiving end of it.

please understand that your ideas may not be shared or prioritized by other members of the community or dev team. Nagging won’t get you what you want and is displeasing to be on the receiving end of it.

That does not always true. Influencing opinions requires you to be persistent in saying the need of you. I would say that’s a healthy activity, and that is exactly why expression is protected

o
Opinions are welcome on here. Nagging and acting like child having a tantrum because others don’t share your opinions is another thing. Please closely read the community guidelines. Also, the mods here do an awesome job. displeasing them is not a good thing :)

We have no plans to implement Notion/Airtable-like database functionalities, but that in theory doesn’t prevent plugin authors from turning Markdown tables into databases […] This is the trade-off we made for Obsidian, which is why I said I don’t think this would be changed at all. It’s in Obsidian’s DNA. Of course, it’s entirely up to you whether you want to make that trade-off, and we respect that. If you value functionality more than future-proofness, something like Notion or Fibery might work better.

It is hoped that Obsidian will not be bound by the framework of `.md` Feature archive

With WYSIWYG, I don’t see that as a limit. If you take a look at the community themes, you can see how much people can achieve with CSS customization. I don’t believe it has anything to do with Markdown – typography can be changed entirely with CSS. Second, does the use of .md format also doomed Obsidian to miss some advanced features? Like a database? We have no plans to implement Notion/Airtable-like database functionalities, but that in theory doesn’t prevent plugin authors from turning …