I want to knwo whether is there anyway to disable auto-save, i just don’t want my note be auto-saving, it cause synchronizing traffic problem to me, every single trivial action will triggle the auto-saving, thus my note keep being saved and uploading consistently. It would be better to provide an option to diable/enable auto saving or an option to set auto-saving interval.

Agree - there would be multiple benefits

I have also been struggling to work around the autosave feature, since it causes issues with both the system I use for cloud syncing and my development workflow in general (I use Obsidian for a couple code-based projects where I need to be deliberate about when I save updates to the files). Being able to at least configure the interval would be very helpful.

May I ask the opposite question, please: How DO I (prompt a) Save - Cmnd+S as I would expect… there is no suggestion in the menus that such an option exists?

yes, you can change the shortcuts in the hotkey section of settings.

Got it! Thanks @WhiteNoise. Save was ⌘+S all along

As I said, I’m new to Obsidian. But really, really liking it. Thanks to everyone.

I am fairly certain the overly high frequency of iCloud writes is causing Apple to pause my obsidian folder when using my windows machine. Hugely annoying because I have to reboot my machine to resolve the issue, and end up losing my recent notes.

I signed up for this forum to say I’m having the same issue. Mid sentence I’ll lose content and then have to hit Ctrl-Z. I have a Windows machine connected to iCloud.

If I could just turn off auto-save then I could hit ctrl-s whenever I needed to save. Instead it’s just syncing all the time and causes this really weird typing bug where it goes back in time as I’m typing a sentence.

I’m bumping up on this as well. I sync to Google Drive using InSync on Linux which works great for a work-related vault (I use Obsidian Sync for personal work). However, since Obsidian saves every key type, Google Drive will only store the last 100 versions which is basically my last 100 key types.

Can we get a throttling concept built into auto-save? It really doesn’t make sense to save every key type, at least wait a second for typing activity on the file to come to a stop before saving.

Agreed! There are many reasons why the ability to disable the autosave feature would be wanted. Some are undeniably valid, some are personal preference.

… and, finally, a toggle in the settings to turn on/off autosaving seems like such a simple feature to add.

Such a hard line reminds me of how IOS hides file/folder structure to the point where apps like Obsidian can’t take advantage of things like syncing apps, without special programming to add custom interoperability.

Having the same issue here.
I’m using mega.nz software for syncing between devices. After some period of time it won’t sync your files, moreover, you can’t figure out when exactly this is happening. I have’to relaunch the app to be sure all my files are synced correctly, and due to the app need’s to rescan all my files, it can take up to 10 minutes.

Autosave makes me depressed.
I set the obsidian folder as sync folder. So when I write the note, Obsidian always promoting: EBUSY:resouce busy or locked, open. 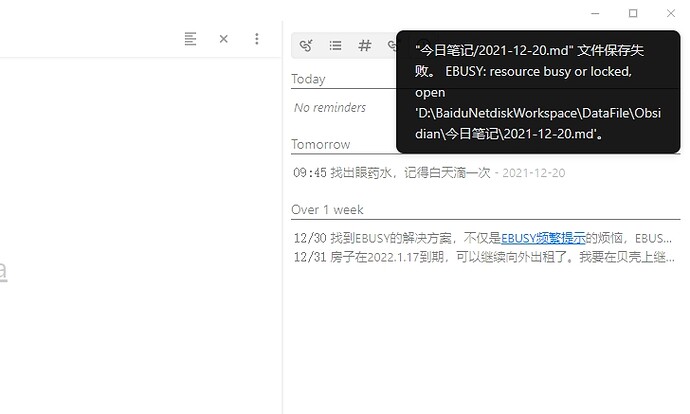 Please, please add the option to turn off Autosave.

Using Obsidian on Windows with iCloud providing the sync produces constant conflicts which are irritating but more significantly each conflict produces a locked file which must be manually deleted. In 20 minutes of editing I have just had 7 of these files created and all have to be manually deleted. Ignoring them doesn’t work because they interfere with backups and they interfere with Obsidian indexing - I guess because they can’t be indexed.

I know I could use the ‘default app’ which, in my case would be Typora where the autosave can be switched off, but the markdown formatting doesn’t precisely match text edited directly in Obsidian so needs re-editing to get the formatting right. This re-editing is not only a waste of time but also goes back to the original problem.

I agree wholeheartedly that this is a sorely lacking feature, but…

I now believe that Obsidian’s functionality is closely tied to the auto-save. It does a lot of different things during saving that are intended to feel seamless to the user, and at least a few of them would break badly if the loaded note were to remain out of sync with the note file’s contents. That’s my impression anyway, now that I’ve written a decently involved plugin for Obsidian.

One workaround, for people who are really struggling with the constant saving, would be to put your vault onto a RAM disk, then copy it back to the hard-disk whenever you really want to save.

I’ve done this, and it works better than you’d expect! Here’s how I did it on windows.

FYI, that long xcopy command includes flags to ensure that the only files that are copied are the ones that are newer on the ram-disk than on the real hard-disk.

Also, if you are handy, you can create a batch script to run that xcopy command, rather than needing to remember it.

Hope that helps. If you are on Linux or Mac, the steps are similar, but you’d use different software and command.

I now believe that Obsidian’s functionality is closely tied to the auto-save. It does a lot of different things during saving that are intended to feel seamless to the user, and at least a few of them would break badly if the loaded note were to remain out of sync with the note file’s contents.

What are the consequences of using the “default app” with auto-save switched off and doing a manual save every minute or so?

I can’t say for certain what the consequences are for not auto-saving, because I’m just basing my supposition on some things I’ve noticed while making my plugin, such as how much data Obsidian is caching behind the scenes, much of which is re-calculated when files are saved.

I know that many plugins, both core and community, use that cached data. Tags, links and YAML-front-matter all rely on it. It is interesting to note that the popular plugin “DataView” keeps its own cached data, but re-calculates it when navigating away from a note instead of when saving. This makes it kind of quirky in that you need to move to a different note, then back again before certain changes will take effect.

Now, as to why all that caching needs to be done at save, rather than just be triggered whenever a note is changed? I can’t be sure. I have a couple of theories, though:

Now that I’ve written it up, theory 2 seems probable to me. However, I could see a few ways around it:

So I guess the gist of this is: it’s a lot more complicated than it seems on the surface. There might be a viable solution, but it’s not obvious (at least to me). One question Obsidian devs might ask: is it worth the effort? People who struggle with jamming syncing systems would argue that, yes, it is worth it! Obsidian devs might be convinced if this was a strong enough concern to counterbalance what is obviously a sticky problem to solve. I’m guessing that it’s not.

I think that the ram-disk idea that I proposed above (and have been actively using) is a workable solution. It might seem like a big deal to implement, but it really isn’t that bad. I admit to having had moments of concern that I hadn’t “saved” my data recently (from the ram disk to the hard disk). One solution would be to have a script that auto-saves (auto-calls xcopy) on a regular basis. THAT seems like more work than it’s worth to me, but it’s all relative. Someone else could see that being perfectly reasonable.

I just found a better solution than using xcopy to sync the ram-disk with the hard-disk.
FreeFileSync is software to sync two folders, either manually, or at regular intervals. This includes a “mirror” mode, which is what we want in this situation.

Obsidian is very flexible but not in this regard?
All those things done during saving should not care wether the saving is triggered automatically or manually.

Not having the option is sad… I was looking through all the options and then looked online to find this thread.

Back to Ghostwriter for me it is then