I’m quite sure this isn’t a bug but I’ve failed miserably to get the dataview to work. I’ve read the instructions (of course), and I’ve watched five different YouTube videos on it. I feel I’ve really put the work in before posting. It’s not rocket science so it has to be something stupid I’ve done/not done, but the instructions are so simply I just don’t see what I’ve missed.

I create a note with the test.

and a second note with

and I’ve tried literally 10+ variations on this, but all I get shown is the LIST query as plaintext. It never queries anything.

Yes the plugin is installed.

This works in local tests. YAML must be on the first line. Use straight quotes (not curly ones as in the forum post … which might just be the forum formatting, of course). 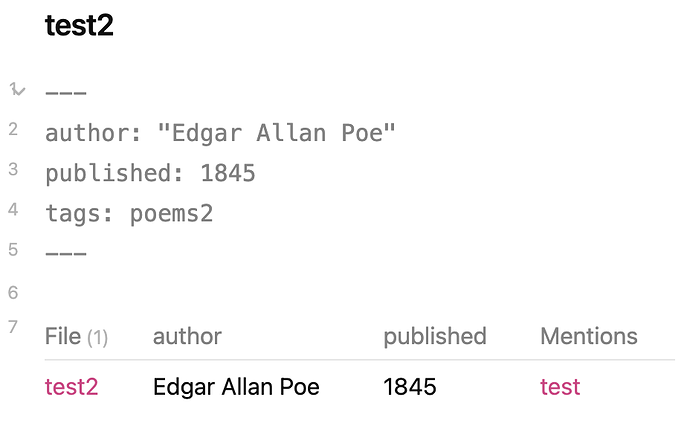 Adding to @eightning’s explanation, if you don’t want to use YAML for your dataview data you can use dataview’s inline function which needs two colons, like this:

I would advise you to read the Beginner’s Guide by @DeniseTodd if you haven’t already, it is really well structured.

The Beginner’s Guide for DATAVIEW Obsidian Plugin — 10 areas where things can...

Don’t let DATAVIEW scare you. Beginners can benefit too. It’s a powerful and versatile plugin to see your notes in report format.