I have found that Tags pannel distinguish case sensitivity of tags. I have got.

I see the point. We will move to a more coherent case insensitive everywhere.

Was this, in theory, fixed? It’s still not consistent.

What I see now is that #Foo and #foo combine in the tags pane as #foo. However, the search is still case-sensitive, so clicking on that only shows pages with #foo lowercase.

Similarly, searching tag:#Foo finds one and tag:#foo finds the other (which makes sense they’d have the same behavior as the pane, since the tag pane is just driving the search pane).

One thing that’s interesting, if only “#Foo” exists, the tag pane shows it in uppercase. If both “#Foo” and “#foo” exist, it only shows lowercase. No idea what inner mixed case would do, but point is that it defaults to a behavior that excludes the case it’s hiding.

Either they should stay separate in the tags pane, or (preferably to me) tags just become case-insensitive in searches as well.

I realize I could do an ignore-case: at the front of every tag:, but that’s pretty onerous. There’s already an issue with saved regex searches being nigh unreadable because there aren’t labels and can’t easily be seen in their entirety. Having to add an ignore specifier would make them even longer (though I might suggest ic: as an abbreviation, seeing how most other query languages just use that or i).

search tags is not case sensitive, post a screenshot.

It’s following the Match Case button on the search pane.

I’ll follow up with screen shots if you need them, but the behavior is pretty obvious in 10.6.

So technically user error, but it’s pretty non-obvious that’s what’s happening. If the intention is to make them case insensitive, I’d argue searching from the tag pane should always tack on an implicit ignore-case: to the front of the tag: search it fills into the bar.

Try the tag pane with match case button on, and keep in mind there’s no equivalent “match case” button for the tag pane to split the tags there.

thank you we will fix this.
the match case should not influence tag search. It should always be case insensitive.

First one shows the tags collapsing case in the tag sidebar (in this sample to the uppercase–that’s also not wholly deterministic, but guessing it’s last file processed). It also shows after me clicking on that and it initializing the search with Match Case already on.

Second one shows the same search after clicking Match Case. It includes both files now. 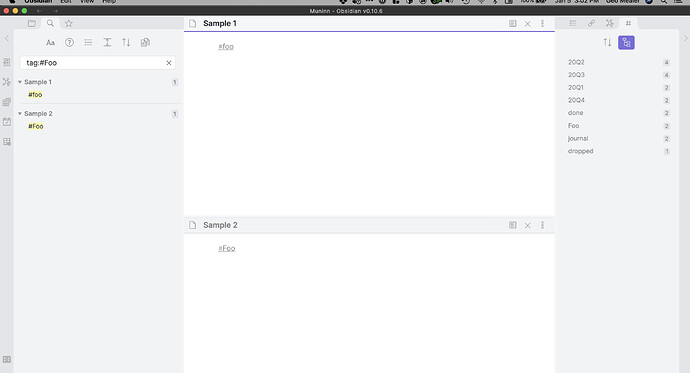