For instance I have a specific line for tags and when searching for that tag I would like to see text close to the line with tags as well, not that single line.

Similarly, if the markdown block happens to be the title, I would like to be able to see what’s below the title, not just the title itself.

Not seeing enough context. When the markdown block is only one line.

Clicking on the more context arrow to expand the context. This is tedious, and makes me miss stuff. I need the overview to be able to find what I’m looking for.

The other opened issue for this is now marked as solved and it is in the feature archive, but it doesn’t seem like 0.12 actually changed anything in this respect. I thought the plan was to add an option to specify how much context to show in the search results?

Yes, I agree with the posts here. @WhiteNoise mentioned in this post when closing out the issue that “There will be a lot of work on this in 0.12” and we are now in v0.13 and these items around “more context” and controlling the amount of lines/context that can be seen have not been addressed. Here is where the comment was made and one of the FR was closed out prematurely: Show more context on backlinks and search panes - #18 by WhiteNoise

@WhiteNoise could we please get these older FR opened back up? They had quite a bit of good traction and conversation. Thanks!

So the 0.12 resolution to this issue was the addition of this button: Show more context.

The problem with this issue is that for some people the context is too much for other people is not enough. Anyway, further improvements/refinements/changes to show more context can be discussed here, I don’t want to resurrect the old threads.

If a block is lines of text with spacing above and below it, then it’s considered a block. But I don’t see this actually happening, maybe improving this to actually be functionally how the program behaves can make the backlinks more effective.

Right now this is not how the program works. If I have bullet points, even without this spacing - still each bullet is considered a block.

I would suggest rather:

@raaneem
I think that Headings, bullet points and also lists will always be considered as a block.

Reasons:
AFAIK, all Markdown features were designed with ability to convert into valid html elements.
Markdown headings are converted to html elements <h1> … <h6>, Markdown lists are converted to html lists <ol> or <ul> and single “bullet points” to html list items <li>. All the above belong to html block-elements. Lists as blocks do contain other blocks (list items).

I am using backlinks with the “expanded view” functionality toggled on, so when I see a backlink, I can also see the text below it.

Why is there a difference between how Expanded View treats bulleted text vs. text that is organized in a hierarchy using header styles? It would be good to see this behavior made consistent.

I was told to log a FR for this feature.

I think sth like this. With list/bullets the expand button recognise the bullet’s children n thus show when u enable expand. But if header, the content within that header section is not recognised as “children”, thus not shown. 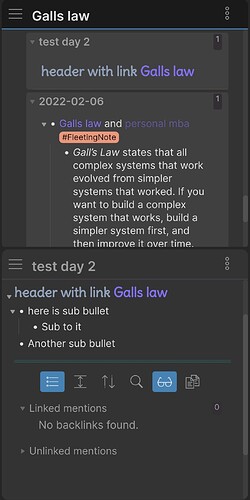 +1 on this feature request. Another way to state the request is that when it comes to context, the block after a heading should be the child of that heading instead of just the sibling as it currently is.