Is there any possibility that a general Autocorrect feature could be added to the existing Spell Checker?

I generally write in a stream of consciousness and don’t pay any attention to capitals or even spelling. If the first letter in a sentence and proper nouns could be capitalized, that alone would be massively helpful. But fixing general spelling errors - a la Word or SwiftKey - would take it to another level.

Here’s a list of open source Spell Check tools, some of which appear to include such a function.

NordSpell seems to be the standard one used by Openoffice, Firefox and more), but SymSpell sounds like an extremely impressive alternative.

I found this AutoHotkey script that seems to work so far (i->I is the only thing I tested). But a built-in, more sophisticated one, would be fantastic.

Autocorrect feature in MS Word
Please add this feature, this is very handy in defining shorthand for long words.

Please add this feature, it is much needed!

At the very least could we implement where Obsidian follows the system-level autocorrect engine, e.g. on macOS?

Here to show support for this feature request. I would love a much more intuitive auto corrector.

Joining the chorus. Would be very useful for real-time, rapid note-taking.

Yup, I would like to have this feature, too.

If you guys need autocorrection, I suggest using the Language Tool plugin.

This is just an OK solution as it won’t automatically correct the spellings like the macOS system level autocorrect, or that of Microsoft Word. And it’s nowhere near “smart” tbh, although it’s better than nothing.

I usually use word/ excel autocorrect list file(.acl, which would be saved on %AppData%\Microsoft\Office ) to log the correction by myself. If Obsidian can directly plug in this database it would be great

I personally use the espanso for system-wide autocorrect, which might help in the meantime?

This resource is awesome. I use Espanso for the same thing system-wide. As an example, since I have an annoying tendency to hit the semicolon instead of the apostrophe, I have an ever-expanding replacement list that looks like this: 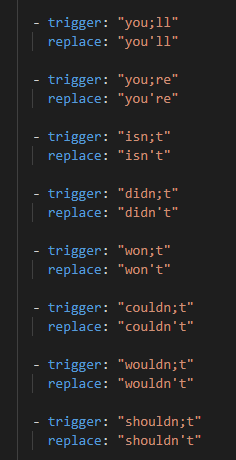 You’ve reminded me that I keep forgetting to add propagate_case: true to these. There goes the next couple of hours…

The Language Tool plugin, while great, does not autocorrect as you type. (IF it does, someone please tell me how!)